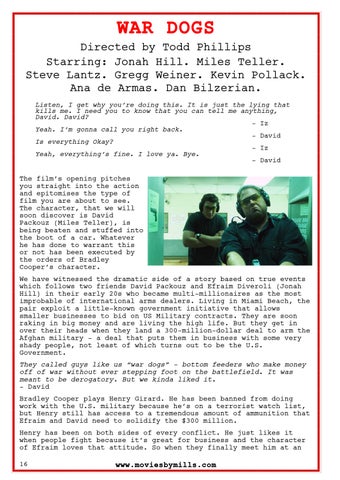 WAR DOGS Directed by Todd Phillips Starring: Jonah Hill. Miles Teller. Steve Lantz. Gregg Weiner. Kevin Pollack. Ana de Armas. Dan Bilzerian. Listen, I get why you’re doing this. It is just the lying that kills me. I need you to know that you can tell me anything, David. David? - Iz Yeah. I’m gonna call you right back. - David Is everything Okay? - Iz Yeah, everything’s fine. I love ya. Bye. - David

The film’s opening pitches you straight into the action and epitomises the type of film you are about to see. The character, that we will soon discover is David Packouz (Miles Teller), is being beaten and stuffed into the boot of a car. Whatever he has done to warrant this or not has been executed by the orders of Bradley Cooper’s character. We have witnessed the dramatic side of a story based on true events which follows two friends David Packouz and Efraim Diveroli (Jonah Hill) in their early 20s who became multi-millionaires as the most improbable of international arms dealers. Living in Miami Beach, the pair exploit a little-known government initiative that allows smaller businesses to bid on US Military contracts. They are soon raking in big money and are living the high life. But they get in over their heads when they land a 300-million-dollar deal to arm the Afghan military – a deal that puts them in business with some very shady people, not least of which turns out to be the U.S. Government. They called guys like us “war dogs” – bottom feeders who make money off of war without ever stepping foot on the battlefield. It was meant to be derogatory. But we kinda liked it. – David Bradley Cooper plays Henry Girard. He has been banned from doing work with the U.S. military because he’s on a terrorist watch list, but Henry still has access to a tremendous amount of ammunition that Efraim and David need to solidify the $300 million. Henry has been on both sides of every conflict. He just likes it when people fight because it’s great for business and the character of Efraim loves that attitude. So when they finally meet him at an 16