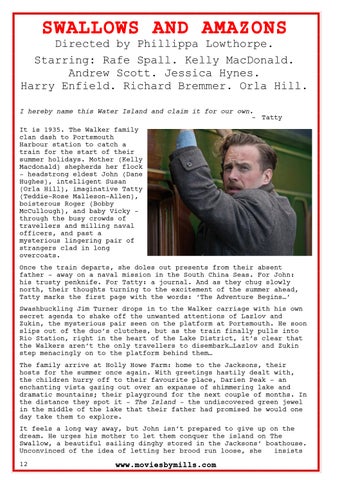 It is 1935. The Walker family clan dash to Portsmouth Harbour station to catch a train for the start of their summer holidays. Mother (Kelly Macdonald) shepherds her flock – headstrong eldest John (Dane Hughes), intelligent Susan (Orla Hill), imaginative Tatty (Teddie-Rose Malleson-Allen), boisterous Roger (Bobby McCullough), and baby Vicky – through the busy crowds of travellers and milling naval officers, and past a mysterious lingering pair of strangers clad in long overcoats. Once the train departs, she doles out presents from their absent father – away on a naval mission in the South China Seas. For John: his trusty penknife. For Tatty: a journal. And as they chug slowly north, their thoughts turning to the excitement of the summer ahead, Tatty marks the first page with the words: ‘The Adventure Begins…’ Swashbuckling Jim Turner drops in to the Walker carriage with his own secret agenda to shake off the unwanted attentions of Lazlov and Zukin, the mysterious pair seen on the platform at Portsmouth. He soon slips out of the duo’s clutches, but as the train finally pulls into Rio Station, right in the heart of the Lake District, it’s clear that the Walkers aren’t the only travellers to disembark…Lazlov and Zukin step menacingly on to the platform behind them… The family arrive at Holly Howe Farm: home to the Jacksons, their hosts for the summer once again. With greetings hastily dealt with, the children hurry off to their favourite place, Darien Peak – an enchanting vista gazing out over an expanse of shimmering lake and dramatic mountains; their playground for the next couple of months. In the distance they spot it – The Island – the undiscovered green jewel in the middle of the lake that their father had promised he would one day take them to explore. It feels a long way away, but John isn’t prepared to give up on the dream. He urges his mother to let them conquer the island on The Swallow, a beautiful sailing dinghy stored in the Jacksons’ boathouse. Unconvinced of the idea of letting her brood run loose, she insists 12