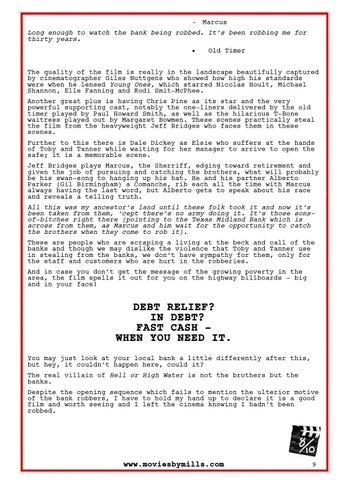 - Marcus Long enough to watch the bank being robbed. It’s been robbing me for thirty years. 

The quality of the film is really in the landscape beautifully captured by cinematographer Giles Nuttgens who showed how high his standards were when he lensed Young Ones, which starred Nicolas Hoult, Michael Shannon, Elle Fanning and Kodi Smit-McPhee. Another great plus is having Chris Pine as its star and the very powerful supporting cast, notably the one-liners delivered by the old timer played by Paul Howard Smith, as well as the hilarious T-Bone waitress played out by Margaret Bowmen. These scenes practically steal the film from the heavyweight Jeff Bridges who faces them in these scenes. Further to this there is Dale Dickey as Elsie who suffers at the hands of Toby and Tanner while waiting for her manager to arrive to open the safe; it is a memorable scene. Jeff Bridges plays Marcus, the Sherriff, edging toward retirement and given the job of pursuing and catching the brothers, what will probably be his swan-song to hanging up his hat. He and his partner Alberto Parker (Gil Birmingham) a Comanche, rib each all the time with Marcus always having the last word, but Alberto gets to speak about his race and reveals a telling truth. All this was my ancestor’s land until these folk took it and now it’s been taken from them, ‘cept there’s no army doing it. It’s those sonsof-bitches right there (pointing to the Texas Midland Bank which is across from them, as Marcus and him wait for the opportunity to catch the brothers when they come to rob it). These are people who are scraping a living at the beck and call of the banks and though we may dislike the violence that Toby and Tanner use in stealing from the banks, we don’t have sympathy for them, only for the staff and customers who are hurt in the robberies. And in case you don’t get the message of the growing poverty in the area, the film spells it out for you on the highway billboards – big and in your face!

DEBT RELIEF? IN DEBT? FAST CASH – WHEN YOU NEED IT. You may just look at your local bank a little differently after this, but hey, it couldn’t happen here, could it? The real villain of Hell or High Water is not the brothers but the banks. Despite the opening sequence which fails to mention the ulterior motive of the bank robbers, I have to hold my hand up to declare it is a good film and worth seeing and I left the cinema knowing I hadn’t been robbed.