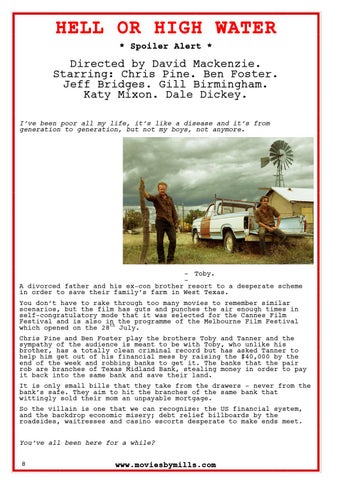 Directed by David Mackenzie. Starring: Chris Pine. Ben Foster. Jeff Bridges. Gill Birmingham. Katy Mixon. Dale Dickey. I’ve been poor all my life, it’s like a disease and it’s from generation to generation, but not my boys, not anymore.

- Toby. A divorced father and his ex-con brother resort to a desperate scheme in order to save their family’s farm in West Texas. You don’t have to rake through too many movies to remember similar scenarios, but the film has guts and punches the air enough times in self-congratulatory mode that it was selected for the Cannes Film Festival and is also in the programme of the Melbourne Film Festival which opened on the 28th July. Chris Pine and Ben Foster play the brothers Toby and Tanner and the sympathy of the audience is meant to be with Toby, who unlike his brother, has a totally clean criminal record but has asked Tanner to help him get out of his financial mess by raising the $40,000 by the end of the week and robbing banks to get it. The banks that the pair rob are branches of Texas Midland Bank, stealing money in order to pay it back into the same bank and save their land. It is only small bills that they take from the drawers – never from the bank’s safe. They aim to hit the branches of the same bank that wittingly sold their mom an unpayable mortgage. So the villain is one that we can recognize: the US financial system, and the backdrop economic misery; debt relief billboards by the roadsides, waitresses and casino escorts desperate to make ends meet. You’ve all been here for a while? 8