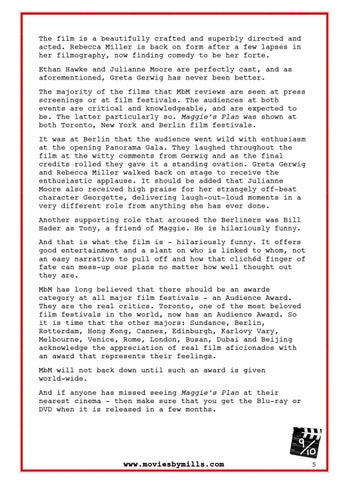 The film is a beautifully crafted and superbly directed and acted. Rebecca Miller is back on form after a few lapses in her filmography, now finding comedy to be her forte. Ethan Hawke and Julianne Moore are perfectly cast, and as aforementioned, Greta Gerwig has never been better. The majority of the films that MbM reviews are seen at press screenings or at film festivals. The audiences at both events are critical and knowledgeable, and are expected to be. The latter particularly so. Maggie’s Plan was shown at both Toronto, New York and Berlin film festivals. It was at Berlin that the audience went wild with enthusiasm at the opening Panorama Gala. They laughed throughout the film at the witty comments from Gerwig and as the final credits rolled they gave it a standing ovation. Greta Gerwig and Rebecca Miller walked back on stage to receive the enthusiastic applause. It should be added that Julianne Moore also received high praise for her strangely off-beat character Georgette, delivering laugh-out-loud moments in a very different role from anything she has ever done. Another supporting role that aroused the Berliners was Bill Hader as Tony, a friend of Maggie. He is hilariously funny. And that is what the film is - hilariously funny. It offers good entertainment and a slant on who is linked to whom, not an easy narrative to pull off and how that clichéd finger of fate can mess-up our plans no matter how well thought out they are. MbM has long believed that there should be an awards category at all major film festivals – an Audience Award. They are the real critics. Toronto, one of the most beloved film festivals in the world, now has an Audience Award. So it is time that the other majors: Sundance, Berlin, Rotterdam, Hong Kong, Cannes, Edinburgh, Karlovy Vary, Melbourne, Venice, Rome, London, Busan, Dubai and Beijing acknowledge the appreciation of real film aficionados with an award that represents their feelings. MbM will not back down until such an award is given world-wide. And if anyone has missed seeing Maggie’s Plan at their nearest cinema – then make sure that you get the Blu-ray or DVD when it is released in a few months.