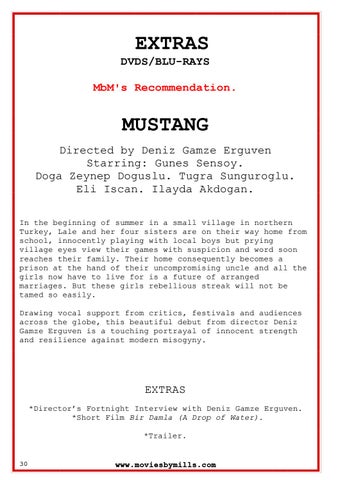 MUSTANG Directed by Deniz Gamze Erguven Starring: Gunes Sensoy. Doga Zeynep Doguslu. Tugra Sunguroglu. Eli Iscan. Ilayda Akdogan. In the beginning of summer in a small village in northern Turkey, Lale and her four sisters are on their way home from school, innocently playing with local boys but prying village eyes view their games with suspicion and word soon reaches their family. Their home consequently becomes a prison at the hand of their uncompromising uncle and all the girls now have to live for is a future of arranged marriages. But these girls rebellious streak will not be tamed so easily. Drawing vocal support from critics, festivals and audiences across the globe, this beautiful debut from director Deniz Gamze Erguven is a touching portrayal of innocent strength and resilience against modern misogyny.