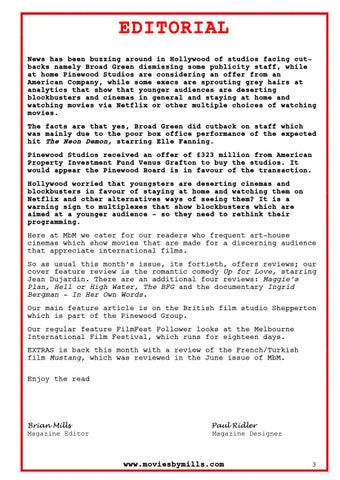 EDITORIAL News has been buzzing around in Hollywood of studios facing cutbacks namely Broad Green dismissing some publicity staff, while at home Pinewood Studios are considering an offer from an American Company, while some execs are sprouting grey hairs at analytics that show that younger audiences are deserting blockbusters and cinemas in general and staying at home and watching movies via Netflix or other multiple choices of watching movies. The facts are that yes, Broad Green did cutback on staff which was mainly due to the poor box office performance of the expected hit The Neon Demon, starring Elle Fanning. Pinewood Studios received an offer of £323 million from American Property Investment Fund Venus Grafton to buy the studios. It would appear the Pinewood Board is in favour of the transaction. Hollywood worried that youngsters are deserting cinemas and blockbusters in favour of staying at home and watching them on Netflix and other alternatives ways of seeing them? It is a warning sign to multiplexes that show blockbusters which are aimed at a younger audience – so they need to rethink their programming. Here at MbM we cater for our readers who frequent art-house cinemas which show movies that are made for a discerning audience that appreciate international films. So as usual this month’s issue, its fortieth, offers reviews; our cover feature review is the romantic comedy Up for Love, starring Jean Dujardin. There are an additional four reviews: Maggie’s Plan, Hell or High Water, The BFG and the documentary Ingrid Bergman – In Her Own Words. Our main feature article is on the British film studio Shepperton which is part of the Pinewood Group. Our regular feature FilmFest Follower looks at the Melbourne International Film Festival, which runs for eighteen days. EXTRAS is back this month with a review of the French/Turkish film Mustang, which was reviewed in the June issue of MbM. Enjoy the read