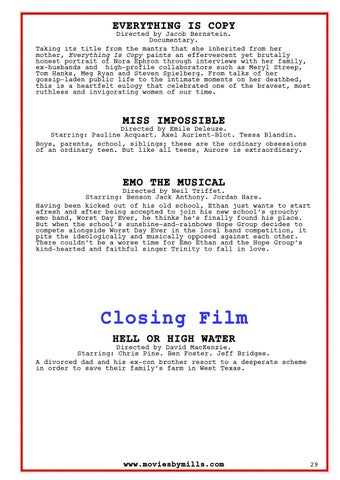 EVERYTHING IS COPY Directed by Jacob Bernstein. Documentary. Taking its title from the mantra that she inherited from her mother, Everything Is Copy paints an effervescent yet brutally honest portrait of Nora Ephron through interviews with her family, ex-husbands and high-profile collaborators such as Meryl Streep, Tom Hanks, Meg Ryan and Steven Spielberg. From talks of her gossip-laden public life to the intimate moments on her deathbed, this is a heartfelt eulogy that celebrated one of the bravest, most ruthless and invigorating women of our time.

MISS IMPOSSIBLE Directed by Emile Deleuze. Starring: Pauline Acquart. Axel Aurient-Blot. Tessa Blandin. Boys, parents, school, siblings; these are the ordinary obsessions of an ordinary teen. But like all teens, Aurore is extraordinary.

EMO THE MUSICAL Directed by Neil Triffet. Starring: Benson Jack Anthony. Jordan Hare. Having been kicked out of his old school, Ethan just wants to start afresh and after being accepted to join his new school’s grouchy emo band, Worst Day Ever, he thinks he’s finally found his place. But when the school’s sunshine-and-rainbows Hope Group decides to compete alongside Worst Day Ever in the local band competition, it pits the ideologically and musically opposed against each other. There couldn’t be a worse time for Emo Ethan and the Hope Group’s kind-hearted and faithful singer Trinity to fall in love.

Closing Film HELL OR HIGH WATER Directed by David MacKenzie. Starring: Chris Pine. Ben Foster. Jeff Bridges. A divorced dad and his ex-con brother resort to a desperate scheme in order to save their family’s farm in West Texas.