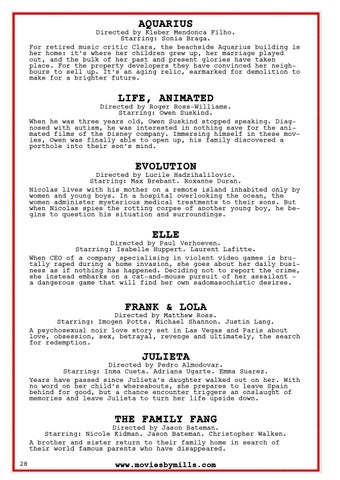 AQUARIUS Directed by Kleber Mendonca Filho. Starring: Sonia Braga. For retired music critic Clara, the beachside Aquarius building is her home: it’s where her children grew up, her marriage played out, and the bulk of her past and present glories have taken place. For the property developers they have convinced her neighbours to sell up. It’s an aging relic, earmarked for demolition to make for a brighter future.

LIFE, ANIMATED Directed by Roger Ross-Williams. Starring: Owen Suskind. When he was three years old, Owen Suskind stopped speaking. Diagnosed with autism, he was interested in nothing save for the animated films of the Disney company. Immersing himself in these movies, Owen was finally able to open up, his family discovered a porthole into their son’s mind.

EVOLUTION Directed by Lucile Hadzihalilovic. Starring: Max Brebant. Roxanne Duran. Nicolas lives with his mother on a remote island inhabited only by women and young boys. In a hospital overlooking the ocean, the women administer mysterious medical treatments to their sons. But when Nicolas spies the rotting corpse of another young boy, he begins to question his situation and surroundings.

ELLE Directed by Paul Verhoeven. Starring: Isabelle Huppert. Laurent Lafitte. When CEO of a company specialising in violent video games is brutally raped during a home invasion, she goes about her daily business as if nothing has happened. Deciding not to report the crime, she instead embarks on a cat-and-mouse pursuit of her assailant – a dangerous game that will find her own sadomasochistic desires.

JULIETA Directed by Pedro Almodovar. Starring: Inma Cueta. Adriana Ugarte. Emma Suarez. Years have passed since Julieta’s daughter walked out on her. With no word on her child’s whereabouts, she prepares to leave Spain behind for good, but a chance encounter triggers an onslaught of memories and leave Julieta to turn her life upside down.

THE FAMILY FANG Directed by Jason Bateman. Starring: Nicole Kidman. Jason Bateman. Christopher Walken. A brother and sister return to their family home in search of their world famous parents who have disappeared. 28