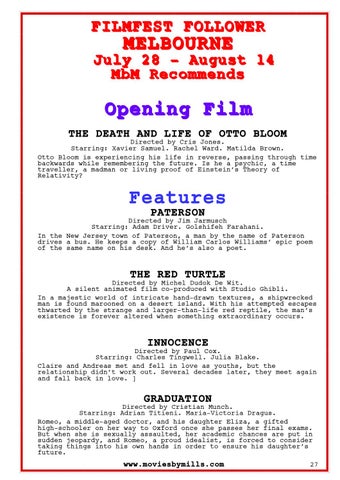 Opening Film THE DEATH AND LIFE OF OTTO BLOOM Directed by Cris Jones. Starring: Xavier Samuel. Rachel Ward. Matilda Brown. Otto Bloom is experiencing his life in reverse, passing through time backwards while remembering the future. Is he a psychic, a time traveller, a madman or living proof of Einstein’s Theory of Relativity?

Directed by Jim Jarmusch Starring: Adam Driver. Golshifeh Farahani. In the New Jersey town of Paterson, a man by the name of Paterson drives a bus. He keeps a copy of William Carlos Williams’ epic poem of the same name on his desk. And he’s also a poet.

THE RED TURTLE Directed by Michel Dudok De Wit. A silent animated film co-produced with Studio Ghibli. In a majestic world of intricate hand-drawn textures, a shipwrecked man is found marooned on a desert island. With his attempted escapes thwarted by the strange and larger-than-life red reptile, the man’s existence is forever altered when something extraordinary occurs.

INNOCENCE Directed by Paul Cox. Starring: Charles Tingwell. Julia Blake. Claire and Andreas met and fell in love as youths, but the relationship didn’t work out. Several decades later, they meet again and fall back in love. ]

GRADUATION Directed by Cristian Munch. Starring: Adrian Titieni. Maria-Victoria Dragus. Romeo, a middle-aged doctor, and his daughter Eliza, a gifted high-schooler on her way to Oxford once she passes her final exams. But when she is sexually assaulted, her academic chances are put in sudden jeopardy, and Romeo, a proud idealist, is forced to consider taking things into his own hands in order to ensure his daughter’s future.