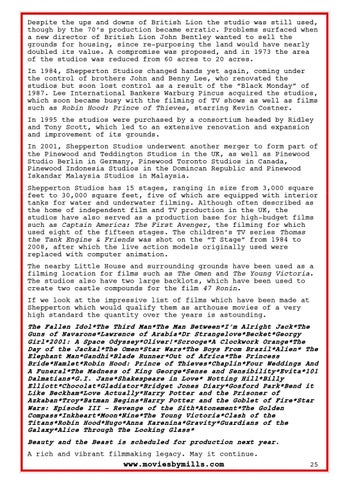 Despite the ups and downs of British Lion the studio was still used, though by the 70’s production became erratic. Problems surfaced when a new director of British Lion John Bentley wanted to sell the grounds for housing, since re-purposing the land would have nearly doubled its value. A compromise was proposed, and in 1973 the area of the studios was reduced from 60 acres to 20 acres. In 1984, Shepperton Studios changed hands yet again, coming under the control of brothers John and Benny Lee, who renovated the studios but soon lost control as a result of the “Black Monday” of 1987. Lee International Bankers Warburg Pincus acquired the studios, which soon became busy with the filming of TV shows as well as films such as Robin Hood: Prince of Thieves, starring Kevin Costner. In 1995 the studios were purchased by a consortium headed by Ridley and Tony Scott, which led to an extensive renovation and expansion and improvement of its grounds. In 2001, Shepperton Studios underwent another merger to form part of the Pinewood and Teddington Studios in the UK, as well as Pinewood Studio Berlin in Germany, Pinewood Toronto Studios in Canada, Pinewood Indonesia Studios in the Domincan Republic and Pinewood Iskandar Malaysia Studios in Malaysia. Shepperton Studios has 15 stages, ranging in size from 3,000 square feet to 30,000 square feet, five of which are equipped with interior tanks for water and underwater filming. Although often described as the home of independent film and TV production in the UK, the studios have also served as a production base for high-budget films such as Captain America: The First Avenger, the filming for which used eight of the fifteen stages. The children’s TV series Thomas the Tank Engine & Friends was shot on the “T Stage” from 1984 to 2008, after which the live action models originally used were replaced with computer animation. The nearby Little House and surrounding grounds have been used as a filming location for films such as The Omen and The Young Victoria. The studios also have two large backlots, which have been used to create two castle compounds for the film 47 Ronin. If we look at the impressive list of films which have been made at Shepperton which would qualify them as arthouse movies of a very high standard the quantity over the years is astounding.