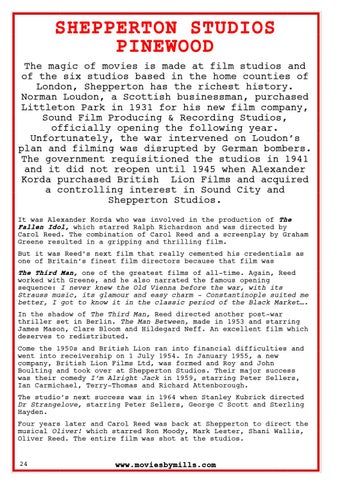 SHEPPERTON STUDIOS PINEWOOD The magic of movies is made at film studios and of the six studios based in the home counties of London, Shepperton has the richest history. Norman Loudon, a Scottish businessman, purchased Littleton Park in 1931 for his new film company, Sound Film Producing &amp; Recording Studios, officially opening the following year. Unfortunately, the war intervened on Loudon’s plan and filming was disrupted by German bombers. The government requisitioned the studios in 1941 and it did not reopen until 1945 when Alexander Korda purchased British Lion Films and acquired a controlling interest in Sound City and Shepperton Studios. It was Alexander Korda who was involved in the production of The Fallen Idol, which starred Ralph Richardson and was directed by Carol Reed. The combination of Carol Reed and a screenplay by Graham Greene resulted in a gripping and thrilling film. But it was Reed’s next film that really cemented his credentials as one of Britain’s finest film directors because that film was

The Third Man, one of the greatest films of all-time. Again, Reed worked with Greene, and he also narrated the famous opening sequence: I never knew the Old Vienna before the war, with its Strauss music, its glamour and easy charm – Constantinople suited me better, I got to know it in the classic period of the Black Market…. In the shadow of The Third Man, Reed directed another post-war thriller set in Berlin. The Man Between, made in 1953 and starring James Mason, Clare Bloom and Hildegard Neff. An excellent film which deserves to redistributed. Come the 1950s and British Lion ran into financial difficulties and went into receivership on 1 July 1954. In January 1955, a new company, British Lion Films Ltd, was formed and Roy and John Boulting and took over at Shepperton Studios. Their major success was their comedy I’m Alright Jack in 1959, starring Peter Sellers, Ian Carmichael, Terry-Thomas and Richard Attenborough. The studio’s next success was in 1964 when Stanley Kubrick directed Dr Strangelove, starring Peter Sellers, George C Scott and Sterling Hayden. Four years later and Carol Reed was back at Shepperton to direct the musical Oliver! which starred Ron Moody, Mark Lester, Shani Wallis, Oliver Reed. The entire film was shot at the studios.