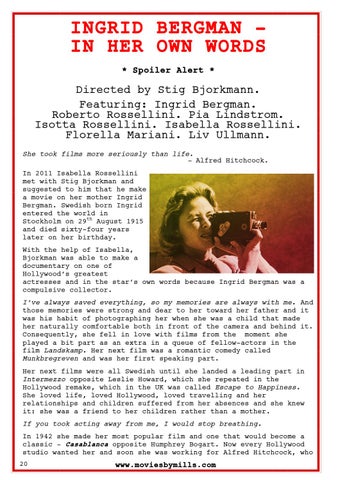 INGRID BERGMAN – IN HER OWN WORDS * Spoiler Alert *

Directed by Stig Bjorkmann. Featuring: Ingrid Bergman. Roberto Rossellini. Pia Lindstrom. Isotta Rossellini. Isabella Rossellini. Florella Mariani. Liv Ullmann. She took films more seriously than life. - Alfred Hitchcock. In 2011 Isabella Rossellini met with Stig Bjorkman and suggested to him that he make a movie on her mother Ingrid Bergman. Swedish born Ingrid entered the world in Stockholm on 29th August 1915 and died sixty-four years later on her birthday. With the help of Isabella, Bjorkman was able to make a documentary on one of Hollywood’s greatest actresses and in the star’s own words because Ingrid Bergman was a compulsive collector. I’ve always saved everything, so my memories are always with me. And those memories were strong and dear to her toward her father and it was his habit of photographing her when she was a child that made her naturally comfortable both in front of the camera and behind it. Consequently, she fell in love with films from the moment she played a bit part as an extra in a queue of fellow-actors in the film Landskamp. Her next film was a romantic comedy called Munkbregreven and was her first speaking part. Her next films were all Swedish until she landed a leading part in Intermezzo opposite Leslie Howard, which she repeated in the Hollywood remake, which in the UK was called Escape to Happiness. She loved life, loved Hollywood, loved travelling and her relationships and children suffered from her absences and she knew it: she was a friend to her children rather than a mother. If you took acting away from me, I would stop breathing. In 1942 she made her most popular film and one that would become a classic – Casablanca opposite Humphrey Bogart. Now every Hollywood studio wanted her and soon she was working for Alfred Hitchcock, who 20