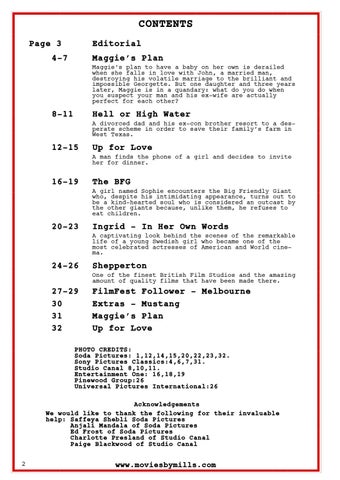 Maggie’s Plan Maggie’s plan to have a baby on her own is derailed when she falls in love with John, a married man, destroying his volatile marriage to the brilliant and impossible Georgette. But one daughter and three years later, Maggie is in a quandary: what do you do when you suspect your man and his ex-wife are actually perfect for each other?

Hell or High Water A divorced dad and his ex-con brother resort to a desperate scheme in order to save their family’s farm in West Texas.

Up for Love A man finds the phone of a girl and decides to invite her for dinner.

The BFG A girl named Sophie encounters the Big Friendly Giant who, despite his intimidating appearance, turns out to be a kind-hearted soul who is considered an outcast by the other giants because, unlike them, he refuses to eat children.

Ingrid – In Her Own Words A captivating look behind the scenes of the remarkable life of a young Swedish girl who became one of the most celebrated actresses of American and World cinema.

Shepperton One of the finest British Film Studios and the amazing amount of quality films that have been made there.