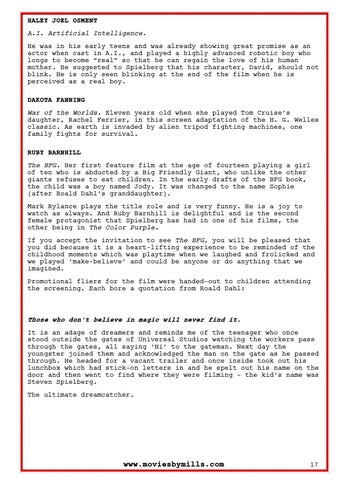 He was in his early teens and was already showing great promise as an actor when cast in A.I., and played a highly advanced robotic boy who longs to become “real” so that he can regain the love of his human mother. He suggested to Spielberg that his character, David, should not blink. He is only seen blinking at the end of the film when he is perceived as a real boy. DAKOTA FANNING War of the Worlds. Eleven years old when she played Tom Cruise’s daughter, Rachel Ferrier, in this screen adaptation of the H. G. Welles classic. As earth is invaded by alien tripod fighting machines, one family fights for survival.

RUBY BARNHILL The BFG. Her first feature film at the age of fourteen playing a girl of ten who is abducted by a Big Friendly Giant, who unlike the other giants refuses to eat children. In the early drafts of the BFG book, the child was a boy named Jody. It was changed to the name Sophie (after Roald Dahl’s granddaughter). Mark Rylance plays the title role and is very funny. He is a joy to watch as always. And Ruby Barnhill is delightful and is the second female protagonist that Spielberg has had in one of his films, the other being in The Color Purple. If you accept the invitation to see The BFG, you will be pleased that you did because it is a heart-lifting experience to be reminded of the childhood moments which was playtime when we laughed and frolicked and we played ‘make-believe’ and could be anyone or do anything that we imagined. Promotional fliers for the film were handed-out to children attending the screening. Each bore a quotation from Roald Dahl:

Those who don’t believe in magic will never find it. It is an adage of dreamers and reminds me of the teenager who once stood outside the gates of Universal Studios watching the workers pass through the gates, all saying ‘Hi’ to the gateman. Next day the youngster joined them and acknowledged the man on the gate as he passed through. He headed for a vacant trailer and once inside took out his lunchbox which had stick-on letters in and he spelt out his name on the door and then went to find where they were filming – the kid’s name was Steven Spielberg. The ultimate dreamcatcher.