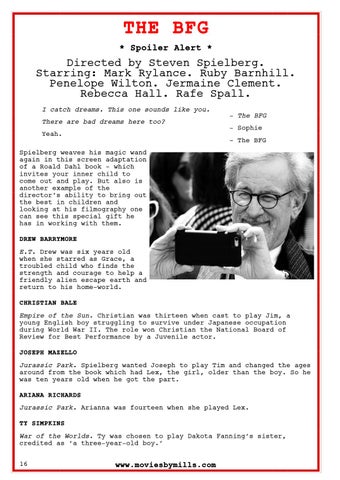 Spielberg weaves his magic wand again in this screen adaptation of a Roald Dahl book – which invites your inner child to come out and play. But also is another example of the director’s ability to bring out the best in children and looking at his filmography one can see this special gift he has in working with them. DREW BARRYMORE E.T. Drew was six years old when she starred as Grace, a troubled child who finds the strength and courage to help a friendly alien escape earth and return to his home-world. CHRISTIAN BALE Empire of the Sun. Christian was thirteen when cast to play Jim, a young English boy struggling to survive under Japanese occupation during World War II. The role won Christian the National Board of Review for Best Performance by a Juvenile actor. JOSEPH MAZELLO

Jurassic Park. Spielberg wanted Joseph to play Tim and changed the ages around from the book which had Lex, the girl, older than the boy. So he was ten years old when he got the part. ARIANA RICHARDS Jurassic Park. Arianna was fourteen when she played Lex. TY SIMPKINS War of the Worlds. Ty was chosen to play Dakota Fanning’s sister, credited as ‘a three-year-old boy.’ 16