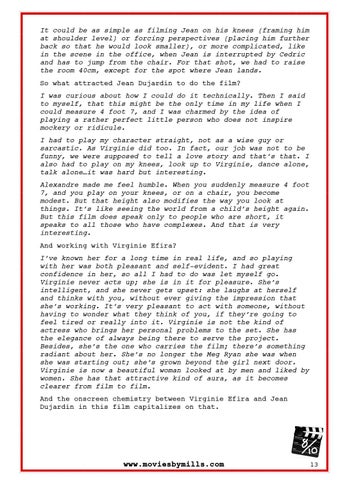 It could be as simple as filming Jean on his knees (framing him at shoulder level) or forcing perspectives (placing him further back so that he would look smaller), or more complicated, like in the scene in the office, when Jean is interrupted by Cedric and has to jump from the chair. For that shot, we had to raise the room 40cm, except for the spot where Jean lands. So what attracted Jean Dujardin to do the film? I was curious about how I could do it technically. Then I said to myself, that this might be the only time in my life when I could measure 4 foot 7, and I was charmed by the idea of playing a rather perfect little person who does not inspire mockery or ridicule. I had to play my character straight, not as a wise guy or sarcastic. As Virginie did too. In fact, our job was not to be funny, we were supposed to tell a love story and that’s that. I also had to play on my knees, look up to Virginie, dance alone, talk alone…it was hard but interesting. Alexandre made me feel humble. When you suddenly measure 4 foot 7, and you play on your knees, or on a chair, you become modest. But that height also modifies the way you look at things. It’s like seeing the world from a child’s height again. But this film does speak only to people who are short, it speaks to all those who have complexes. And that is very interesting. And working with Virginie Efira?

I’ve known her for a long time in real life, and so playing with her was both pleasant and self-evident. I had great confidence in her, so all I had to do was let myself go. Virginie never acts up; she is in it for pleasure. She’s intelligent, and she never gets upset: she laughs at herself and thinks with you, without ever giving the impression that she’s working. It’s very pleasant to act with someone, without having to wonder what they think of you, if they’re going to feel tired or really into it. Virginie is not the kind of actress who brings her personal problems to the set. She has the elegance of always being there to serve the project. Besides, she’s the one who carries the film; there’s something radiant about her. She’s no longer the Meg Ryan she was when she was starting out; she’s grown beyond the girl next door. Virginie is now a beautiful woman looked at by men and liked by women. She has that attractive kind of aura, as it becomes clearer from film to film. And the onscreen chemistry between Virginie Efira and Jean Dujardin in this film capitalizes on that.