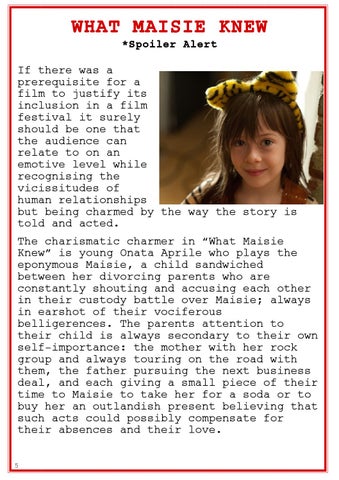 WHAT MAISIE KNEW *Spoiler Alert If there was a prerequisite for a film to justify its inclusion in a film festival it surely should be one that the audience can relate to on an emotive level while recognising the vicissitudes of human relationships but being charmed by the way the story is told and acted. The charismatic charmer in â&amp;#x20AC;&amp;#x153;What Maisie Knewâ&amp;#x20AC;? is young Onata Aprile who plays the eponymous Maisie, a child sandwiched between her divorcing parents who are constantly shouting and accusing each other in their custody battle over Maisie; always in earshot of their vociferous belligerences. The parents attention to their child is always secondary to their own self-importance: the mother with her rock group and always touring on the road with them, the father pursuing the next business deal, and each giving a small piece of their time to Maisie to take her for a soda or to buy her an outlandish present believing that such acts could possibly compensate for their absences and their love. 5