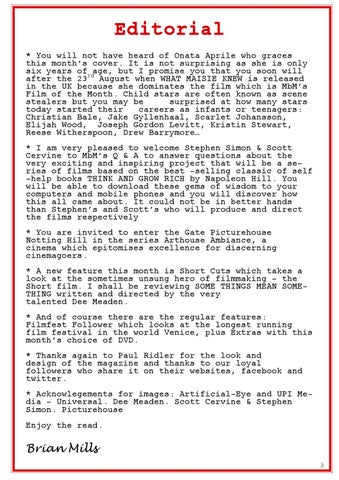 Editorial * You will not have heard of Onata Aprile who graces this month’s cover. It is not surprising as she is only six years ofrdage, but I promise you that you soon will after the 23 August when WHAT MAISIE KNEW is released in the UK because she dominates the film which is MbM’s Film of the Month. Child stars are often known as scene stealers but you may be surprised at how many stars today started their careers as infants or teenagers: Christian Bale, Jake Gyllenhaal, Scarlet Johansson, Elijah Wood, Joseph Gordon Levitt, Kristin Stewart, Reese Witherspoon, Drew Barrymore… * I am very pleased to welcome Stephen Simon &amp; Scott Cervine to MbM’s Q &amp; A to answer questions about the very exciting and inspiring project that will be a series of films based on the best –selling classic of self -help books THINK AND GROW RICH by Napoleon Hill. You will be able to download these gems of wisdom to your computers and mobile phones and you will discover how this all came about. It could not be in better hands than Stephen’s and Scott’s who will produce and direct the films respectively * You are invited to enter the Gate Picturehouse Notting Hill in the series Arthouse Ambiance, a cinema which epitomises excellence for discerning cinemagoers. * A new feature this month is Short Cuts which takes a look at the sometimes unsung hero of filmmaking – the Short film. I shall be reviewing SOME THINGS MEAN SOMETHING written and directed by the very talented Dee Meaden. * And of course there are the regular features: Filmfest Follower which looks at the longest running film festival in the world Venice, plus Extras with this month’s choice of DVD. * Thanks again to Paul Ridler for the look and design of the magazine and thanks to our loyal followers who share it on their websites, facebook and twitter. * Acknowlegements for images: Artificial-Eye and UPI Media - Universal. Dee Meaden. Scott Cervine &amp; Stephen Simon. Picturehouse Enjoy the read.