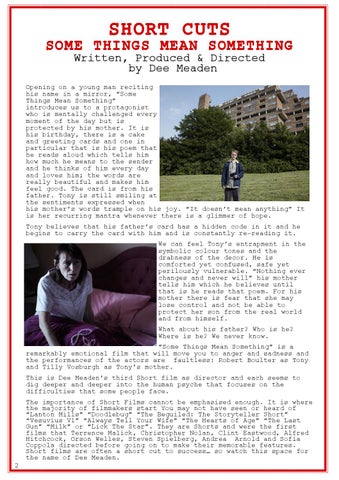 Opening on a young man reciting his name in a mirror, “Some Things Mean Something” introduces us to a protagonist who is mentally challenged every moment of the day but is protected by his mother. It is his birthday, there is a cake and greeting cards and one in particular that is his poem that he reads aloud which tells him how much he means to the sender and he thinks of him every day and loves him; the words are really beautiful and makes him feel good. The card is from his father. Tony is still smiling at the sentiments expressed when his mother’s words trample on his joy. “It doesn’t mean anything” It is her recurring mantra whenever there is a glimmer of hope. Tony believes that his father’s card has a hidden code in it and he begins to carry the card with him and is constantly re-reading it. We can feel Tony’s entrapment in the symbolic colour tones and the drabness of the decor. He is comforted yet confused, safe yet perilously vulnerable. “Nothing ever changes and never will” his mother tells him which he believes until that is he reads that poem. For his mother there is fear that she may lose control and not be able to protect her son from the real world and from himself. What about his father? Who is he? Where is he? We never know. “Some Things Mean Something” is a remarkably emotional film that will move you to anger and sadness and the performances of the actors are faultless: Robert Boulter as Tony and Tilly Vosburgh as Tony’s mother. This is Dee Meaden’s third Short film as director and each seems to dig deeper and deeper into the human psyche that focuses on the difficulties that some people face. The importance of Short Films cannot be emphasised enough. It is where the majority of filmmakers start You may not have seen or heard of “Lanton Mills” “Doodlebug” “The Beguiled: The Storyteller Short” “Vesuvius V1” “Always Tell Your Wife” “The Hearts of Age” “The Last Gun” “Milk” or “Lick The Star”. They are Shorts and were the first films that Terrence Malick, Christopher Nolan, Clint Eastwood, Alfred Hitchcock, Orson Welles, Steven Spielberg, Andrea Arnold and Sofia Coppola directed before going on to make their memorable features. Short films are often a short cut to success… so watch this space for the name of Dee Meaden. 2