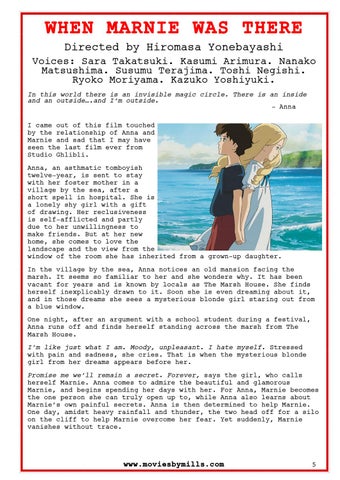 WHEN MARNIE WAS THERE Directed by Hiromasa Yonebayashi Voices: Sara Takatsuki. Kasumi Arimura. Nanako Matsushima. Susumu Terajima. Toshi Negishi. Ryoko Moriyama. Kazuko Yoshiyuki. In this world there is an invisible magic circle. There is an inside and an outside….and I’m outside. - Anna I came out of this film touched by the relationship of Anna and Marnie and sad that I may have seen the last film ever from Studio Ghlibli. Anna, an asthmatic tomboyish twelve-year, is sent to stay with her foster mother in a village by the sea, after a short spell in hospital. She is a lonely shy girl with a gift of drawing. Her reclusiveness is self-afflicted and partly due to her unwillingness to make friends. But at her new home, she comes to love the landscape and the view from the window of the room she has inherited from a grown-up daughter. In the village by the sea, Anna notices an old mansion facing the marsh. It seems so familiar to her and she wonders why. It has been vacant for years and is known by locals as The Marsh House. She finds herself inexplicably drawn to it. Soon she is even dreaming about it, and in those dreams she sees a mysterious blonde girl staring out from a blue window. One night, after an argument with a school student during a festival, Anna runs off and finds herself standing across the marsh from The Marsh House. I’m like just what I am. Moody, unpleasant. I hate myself. Stressed with pain and sadness, she cries. That is when the mysterious blonde girl from her dreams appears before her. Promise me we’ll remain a secret. Forever, says the girl, who calls herself Marnie. Anna comes to admire the beautiful and glamorous Marnie, and begins spending her days with her. For Anna, Marnie becomes the one person she can truly open up to, while Anna also learns about Marnie’s own painful secrets. Anna is then determined to help Marnie. One day, amidst heavy rainfall and thunder, the two head off for a silo on the cliff to help Marnie overcome her fear. Yet suddenly, Marnie vanishes without trace.