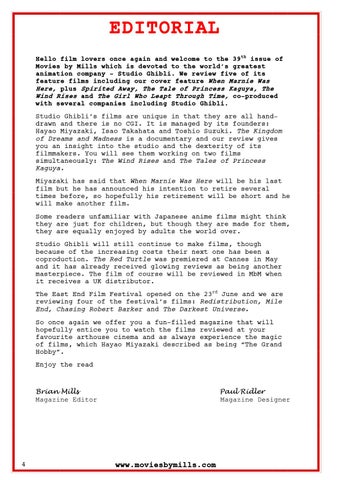 EDITORIAL Hello film lovers once again and welcome to the 39th issue of Movies by Mills which is devoted to the world’s greatest animation company – Studio Ghibli. We review five of its feature films including our cover feature When Marnie Was Here, plus Spirited Away, The Tale of Princess Kaguya, The Wind Rises and The Girl Who Leapt Through Time, co-produced with several companies including Studio Ghibli. Studio Ghibli’s films are unique in that they are all handdrawn and there is no CGI. It is managed by its founders: Hayao Miyazaki, Isao Takahata and Toshio Suzuki. The Kingdom of Dreams and Madness is a documentary and our review gives you an insight into the studio and the dexterity of its filmmakers. You will see them working on two films simultaneously: The Wind Rises and The Tales of Princess Kaguya. Miyazaki has said that When Marnie Was Here will be his last film but he has announced his intention to retire several times before, so hopefully his retirement will be short and he will make another film. Some readers unfamiliar with Japanese anime films might think they are just for children, but though they are made for them, they are equally enjoyed by adults the world over. Studio Ghibli will still continue to make films, though because of the increasing costs their next one has been a coproduction. The Red Turtle was premiered at Cannes in May and it has already received glowing reviews as being another masterpiece. The film of course will be reviewed in MbM when it receives a UK distributor. The East End Film Festival opened on the 23rd June and we are reviewing four of the festival’s films: Redistribution, Mile End, Chasing Robert Barker and The Darkest Universe. So once again we offer you a fun-filled magazine that will hopefully entice you to watch the films reviewed at your favourite arthouse cinema and as always experience the magic of films, which Hayao Miyazaki described as being “The Grand Hobby”. Enjoy the read