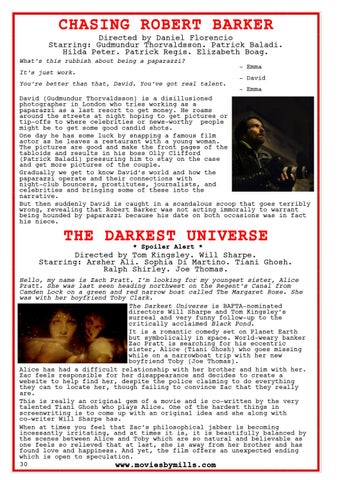 David (Gudmundur Thorvaldsson) is a disillusioned photographer in London who tries working as a paparazzi as a last resort to get money. He roams around the streets at night hoping to get pictures or tip-offs to where celebrities or news-worthy people might be to get some good candid shots. One day he has some luck by snapping a famous film actor as he leaves a restaurant with a young woman. The pictures are good and make the front pages of the tabloids and results in his boss Olly Clifford (Patrick Baladi) pressuring him to stay on the case and get more pictures of the couple. Gradually we get to know David’s world and how the paparazzi operate and their connections with night-club bouncers, prostitutes, journalists, and celebrities and bringing some of these into the narrative. But then suddenly David is caught in a scandalous scoop that goes terribly wrong, revealing that Robert Barker was not acting immorally to warrant being hounded by paparazzi because his date on both occasions was in fact his niece.

Directed by Tom Kingsley. Will Sharpe. Starring: Arsher Ali. Sophia Di Martino. Tiani Ghosh. Ralph Shirley. Joe Thomas. Hello, my name is Zach Pratt. I’m looking for my youngest sister, Alice Pratt. She was last seen heading northwest on the Regent’s Canal from Camden Lock on a green and red narrow boat called The Margaret Rose. She was with her boyfriend Toby Clark. The Darkest Universe is BAFTA-nominated directors Will Sharpe and Tom Kingsley’s surreal and very funny follow-up to the critically acclaimed Black Pond. It is a romantic comedy set on Planet Earth but symbolically in space. World-weary banker Zac Pratt is searching for his eccentric sister, Alice (Tiani Ghosh) who goes missing while on a narrowboat trip with her new boyfriend Toby (Joe Thomas). Alice has had a difficult relationship with her brother and him with her. Zac feels responsible for her disappearance and decides to create a website to help find her, despite the police claiming to do everything they can to locate her, though failing to convince Zac that they really are. This is really an original gem of a movie and is co-written by the very talented Tiani Ghosh who plays Alice. One of the hardest things in screenwriting is to come up with an original idea and she along with co-writer Will Sharpe has. When at times you feel that Zac’s philosophical jabber is becoming incessantly irritating, and at times it is, it is beautifully balanced by the scenes between Alice and Toby which are so natural and believable as one feels so relieved that at last, she is away from her brother and has found love and happiness. And yet, the film offers an unexpected ending which is open to speculation. 30 www.moviesbymills.com