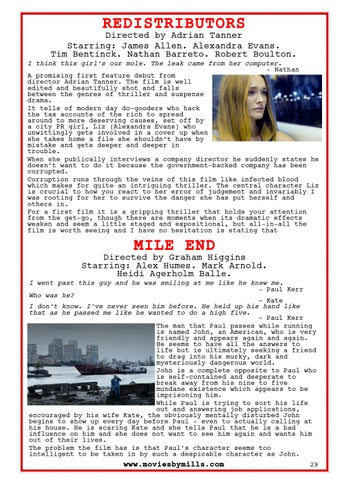 REDISTRIBUTORS Directed by Adrian Tanner Starring: James Allen. Alexandra Evans. Tim Bentinck. Nathan Barreto. Robert Boulton. I think this girl’s our mole. The leak came from her computer. - Nathan A promising first feature debut from director Adrian Tanner. The film is well edited and beautifully shot and falls between the genres of thriller and suspense drama. It tells of modern day do-gooders who hack the tax accounts of the rich to spread around to more deserving causes, set off by a city PR girl, Liz (Alexandra Evans) who unwittingly gets involved in a cover up when she takes home a file she shouldn’t have by mistake and gets deeper and deeper in trouble. When she publically interviews a company director he suddenly states he doesn’t want to do it because the government-backed company has been corrupted. Corruption runs through the veins of this film like infected blood which makes for quite an intriguing thriller. The central character Liz is crucial to how you react to her error of judgement and invariably I was rooting for her to survive the danger she has put herself and others in. For a first film it is a gripping thriller that holds your attention from the get-go, though there are moments when its dramatic effects weaken and seem a little staged and expositional, but all-in-all the film is worth seeing and I have no hesitation is stating that

MILE END Directed by Graham Higgins Starring: Alex Humes. Mark Arnold. Heidi Agerholm Balle. I went past this guy and he was smiling at me like he knew me. - Paul Kerr Who was he? - Kate I don’t know. I’ve never seen him before. He held up his hand like that as he passed me like he wanted to do a high five. - Paul Kerr The man that Paul passes while running is named John, an American, who is very friendly and appears again and again. He seems to have all the answers to life but is ultimately seeking a friend to drag into his murky, dark and mysteriously dangerous world. John is a complete opposite to Paul who is self-contained and desperate to break away from his nine to five mundane existence which appears to be imprisoning him. While Paul is trying to sort his life out and answering job applications, encouraged by his wife Kate, the obviously mentally disturbed John begins to show up every day before Paul - even to actually calling at his house. He is scaring Kate and she tells Paul that he is a bad influence on him and she does not want to see him again and wants him out of their lives. The problem the film has is that Paul’s character seems too intelligent to be taken in by such a despicable character as John.