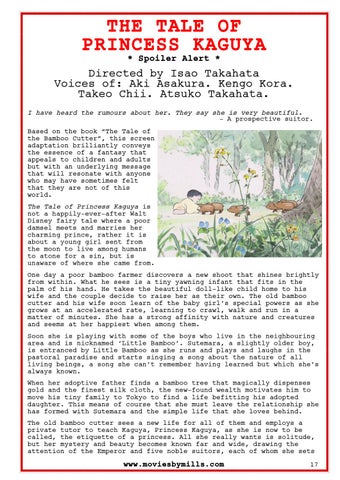 Directed by Isao Takahata Voices of: Aki Asakura. Kengo Kora. Takeo Chii. Atsuko Takahata. I have heard the rumours about her. They say she is very beautiful. - A prospective suitor.

Based on the book “The Tale of the Bamboo Cutter”, this screen adaptation brilliantly conveys the essence of a fantasy that appeals to children and adults but with an underlying message that will resonate with anyone who may have sometimes felt that they are not of this world. The Tale of Princess Kaguya is not a happily-ever-after Walt Disney fairy tale where a poor damsel meets and marries her charming prince, rather it is about a young girl sent from the moon to live among humans to atone for a sin, but is unaware of where she came from. One day a poor bamboo farmer discovers a new shoot that shines brightly from within. What he sees is a tiny yawning infant that fits in the palm of his hand. He takes the beautiful doll-like child home to his wife and the couple decide to raise her as their own. The old bamboo cutter and his wife soon learn of the baby girl’s special powers as she grows at an accelerated rate, learning to crawl, walk and run in a matter of minutes. She has a strong affinity with nature and creatures and seems at her happiest when among them. Soon she is playing with some of the boys who live in the neighbouring area and is nicknamed ‘Little Bamboo’. Sutemara, a slightly older boy, is entranced by Little Bamboo as she runs and plays and laughs in the pastoral paradise and starts singing a song about the nature of all living beings, a song she can’t remember having learned but which she’s always known. When her adoptive father finds a bamboo tree that magically dispenses gold and the finest silk cloth, the new-found wealth motivates him to move his tiny family to Tokyo to find a life befitting his adopted daughter. This means of course that she must leave the relationship she has formed with Sutemara and the simple life that she loves behind. The old bamboo cutter sees a new life for all of them and employs a private tutor to teach Kaguya, Princess Kaguya, as she is now to be called, the etiquette of a princess. All she really wants is solitude, but her mystery and beauty becomes known far and wide, drawing the attention of the Emperor and five noble suitors, each of whom she sets