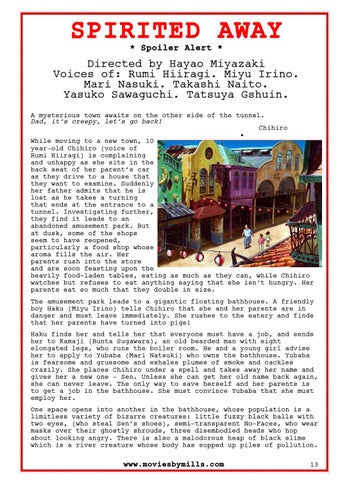 While moving to a new town, 10 year-old Chihiro (voice of Rumi Hiiragi) is complaining and unhappy as she sits in the back seat of her parent’s car as they drive to a house that they want to examine. Suddenly her father admits that he is lost as he takes a turning that ends at the entrance to a tunnel. Investigating further, they find it leads to an abandoned amusement park. But at dusk, some of the shops seem to have reopened, particularly a food shop whose aroma fills the air. Her parents rush into the store and are soon feasting upon the heavily food-laden tables, eating as much as they can, while Chihiro watches but refuses to eat anything saying that she isn’t hungry. Her parents eat so much that they double in size. The amusement park leads to a gigantic floating bathhouse. A friendly boy Haku (Miyu Irino) tells Chihiro that she and her parents are in danger and must leave immediately. She rushes to the eatery and finds that her parents have turned into pigs! Haku finds her and tells her that everyone must have a job, and sends her to Kamaji (Bunta Sugawara), an old bearded man with eight elongated legs, who runs the boiler room. He and a young girl advise her to apply to Yubaba (Mari Natsuki) who owns the bathhouse. Yubaba is fearsome and gruesome and exhales plumes of smoke and cackles crazily. She places Chihiro under a spell and takes away her name and gives her a new one – Sen. Unless she can get her old name back again, she can never leave. The only way to save herself and her parents is to get a job in the bathhouse. She must convince Yubaba that she must employ her. One space opens into another in the bathhouse, whose population is a limitless variety of bizarre creatures: little fuzzy black balls with two eyes, (who steal Sen’s shoes), semi-transparent No-Faces, who wear masks over their ghostly shrouds, three disembodied heads who hop about looking angry. There is also a malodorous heap of black slime which is a river creature whose body has sopped up piles of pollution.