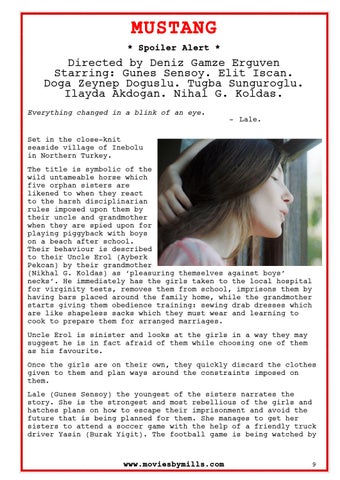 Directed by Deniz Gamze Erguven Starring: Gunes Sensoy. Elit Iscan. Doga Zeynep Doguslu. Tugba Sunguroglu. Ilayda Akdogan. Nihal G. Koldas. Everything changed in a blink of an eye. - Lale. Set in the close-knit seaside village of Inebolu in Northern Turkey. The title is symbolic of the wild untameable horse which five orphan sisters are likened to when they react to the harsh disciplinarian rules imposed upon them by their uncle and grandmother when they are spied upon for playing piggyback with boys on a beach after school. Their behaviour is described to their Uncle Erol (Ayberk Pekcan) by their grandmother (Nikhal G. Koldas) as ‘pleasuring themselves against boys’ necks’. He immediately has the girls taken to the local hospital for virginity tests, removes them from school, imprisons them by having bars placed around the family home, while the grandmother starts giving them obedience training: sewing drab dresses which are like shapeless sacks which they must wear and learning to cook to prepare them for arranged marriages. Uncle Erol is sinister and looks at the girls in a way they may suggest he is in fact afraid of them while choosing one of them as his favourite. Once the girls are on their own, they quickly discard the clothes given to them and plan ways around the constraints imposed on them. Lale (Gunes Sensoy) the youngest of the sisters narrates the story. She is the strongest and most rebellious of the girls and hatches plans on how to escape their imprisonment and avoid the future that is being planned for them. She manages to get her sisters to attend a soccer game with the help of a friendly truck driver Yasin (Burak Yigit). The football game is being watched by