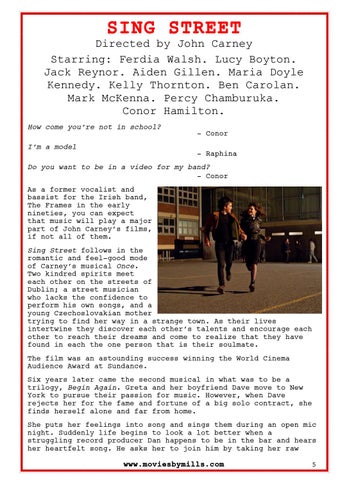 Directed by John Carney Starring: Ferdia Walsh. Lucy Boyton. Jack Reynor. Aiden Gillen. Maria Doyle Kennedy. Kelly Thornton. Ben Carolan. Mark McKenna. Percy Chamburuka. Conor Hamilton. How come you’re not in school? - Conor I’m a model - Raphina Do you want to be in a video for my band? - Conor As a former vocalist and bassist for the Irish band, The Frames in the early nineties, you can expect that music will play a major part of John Carney’s films, if not all of them. Sing Street follows in the romantic and feel-good mode of Carney’s musical Once. Two kindred spirits meet each other on the streets of Dublin; a street musician who lacks the confidence to perform his own songs, and a young Czechoslovakian mother trying to find her way in a strange town. As their lives intertwine they discover each other’s talents and encourage each other to reach their dreams and come to realize that they have found in each the one person that is their soulmate. The film was an astounding success winning the World Cinema Audience Award at Sundance. Six years later came the second musical in what was to be a trilogy, Begin Again. Greta and her boyfriend Dave move to New York to pursue their passion for music. However, when Dave rejects her for the fame and fortune of a big solo contract, she finds herself alone and far from home. She puts her feelings into song and sings them during an open mic night. Suddenly life begins to look a lot better when a struggling record producer Dan happens to be in the bar and hears her heartfelt song. He asks her to join him by taking her raw