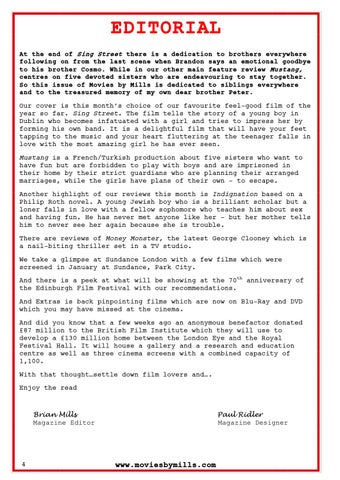 EDITORIAL At the end of Sing Street there is a dedication to brothers everywhere following on from the last scene when Brandon says an emotional goodbye to his brother Cosmo. While in our other main feature review Mustang, centres on five devoted sisters who are endeavouring to stay together. So this issue of Movies by Mills is dedicated to siblings everywhere and to the treasured memory of my own dear brother Peter. Our cover is this month’s choice of our favourite feel-good film of the year so far. Sing Street. The film tells the story of a young boy in Dublin who becomes infatuated with a girl and tries to impress her by forming his own band. It is a delightful film that will have your feet tapping to the music and your heart fluttering at the teenager falls in love with the most amazing girl he has ever seen. Mustang is a French/Turkish production about five sisters who want to have fun but are forbidden to play with boys and are imprisoned in their home by their strict guardians who are planning their arranged marriages, while the girls have plans of their own – to escape. Another highlight of our reviews this month is Indignation based on a Philip Roth novel. A young Jewish boy who is a brilliant scholar but a loner falls in love with a fellow sophomore who teaches him about sex and having fun. He has never met anyone like her – but her mother tells him to never see her again because she is trouble. There are reviews of Money Monster, the latest George Clooney which is a nail-biting thriller set in a TV studio. We take a glimpse at Sundance London with a few films which were screened in January at Sundance, Park City. And there is a peek at what will be showing at the 70th anniversary of the Edinburgh Film Festival with our recommendations. And Extras is back pinpointing films which are now on Blu-Ray and DVD which you may have missed at the cinema. And did you know that a few weeks ago an anonymous benefactor donated £87 million to the British Film Institute which they will use to develop a £130 million home between the London Eye and the Royal Festival Hall. It will house a gallery and a research and education centre as well as three cinema screens with a combined capacity of 1,100. With that thought…settle down film lovers and…. Enjoy the read