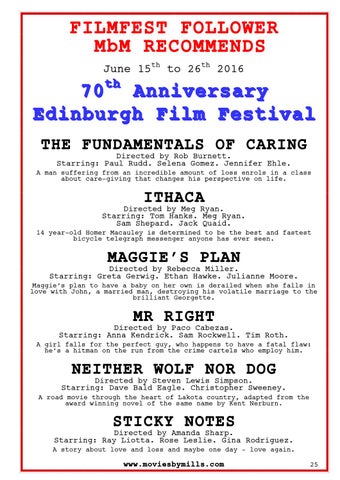 A man suffering from an incredible amount of loss enrols in a class about care-giving that changes his perspective on life.

Directed by Rebecca Miller. Starring: Greta Gerwig. Ethan Hawke. Julianne Moore. Maggie’s plan to have a baby on her own is derailed when she falls in love with John, a married man, destroying his volatile marriage to the brilliant Georgette.

Directed by Paco Cabezas. Starring: Anna Kendrick. Sam Rockwell. Tim Roth. A girl falls for the perfect guy, who happens to have a fatal flaw: he’s a hitman on the run from the crime cartels who employ him.

NEITHER WOLF NOR DOG

Directed by Steven Lewis Simpson. Starring: Dave Bald Eagle. Christopher Sweeney. A road movie through the heart of Lakota country, adapted from the award winning novel of the same name by Kent Nerburn.