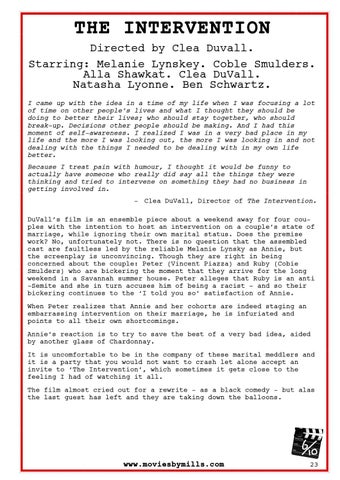 THE INTERVENTION Directed by Clea Duvall. Starring: Melanie Lynskey. Coble Smulders. Alla Shawkat. Clea DuVall. Natasha Lyonne. Ben Schwartz. I came up with the idea in a time of my life when I was focusing a lot of time on other people’s lives and what I thought they should be doing to better their lives; who should stay together, who should break-up. Decisions other people should be making. And I had this moment of self-awareness. I realized I was in a very bad place in my life and the more I was looking out, the more I was looking in and not dealing with the things I needed to be dealing with in my own life better. Because I treat pain with humour, I thought it would be funny to actually have someone who really did say all the things they were thinking and tried to intervene on something they had no business in getting involved in. - Clea DuVall, Director of The Intervention.

DuVall’s film is an ensemble piece about a weekend away for four couples with the intention to host an intervention on a couple’s state of marriage, while ignoring their own marital status. Does the premise work? No, unfortunately not. There is no question that the assembled cast are faultless led by the reliable Melanie Lynsky as Annie, but the screenplay is unconvincing. Though they are right in being concerned about the couple: Peter (Vincent Piazza) and Ruby (Cobie Smulders) who are bickering the moment that they arrive for the long weekend in a Savannah summer house. Peter alleges that Ruby is an anti -Semite and she in turn accuses him of being a racist – and so their bickering continues to the ‘I told you so’ satisfaction of Annie. When Peter realizes that Annie and her cohorts are indeed staging an embarrassing intervention on their marriage, he is infuriated and points to all their own shortcomings. Annie’s reaction is to try to save the best of a very bad idea, aided by another glass of Chardonnay. It is uncomfortable to be in the company of these marital meddlers and it is a party that you would not want to crash let alone accept an invite to ‘The Intervention’, which sometimes it gets close to the feeling I had of watching it all. The film almost cried out for a rewrite – as a black comedy – but alas the last guest has left and they are taking down the balloons.