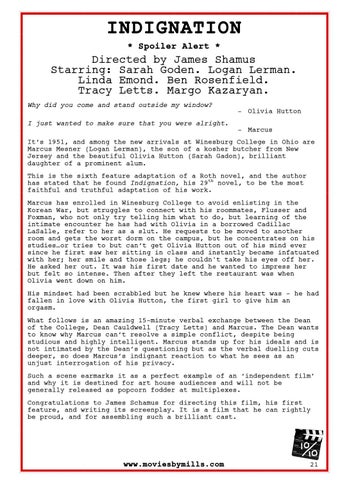 Directed by James Shamus Starring: Sarah Goden. Logan Lerman. Linda Emond. Ben Rosenfield. Tracy Letts. Margo Kazaryan. Why did you come and stand outside my window? - Olivia Hutton I just wanted to make sure that you were alright.

It’s 1951, and among the new arrivals at Winesburg College in Ohio are Marcus Mesner (Logan Lerman), the son of a kosher butcher from New Jersey and the beautiful Olivia Hutton (Sarah Gadon), brilliant daughter of a prominent alum. This is the sixth feature adaptation of a Roth novel, and the author has stated that he found Indignation, his 29th novel, to be the most faithful and truthful adaptation of his work. Marcus has enrolled in Winesburg College to avoid enlisting in the Korean War, but struggles to connect with his roommates, Flusser and Foxman, who not only try telling him what to do, but learning of the intimate encounter he has had with Olivia in a borrowed Cadillac LaSalle, refer to her as a slut. He requests to be moved to another room and gets the worst dorm on the campus, but he concentrates on his studies…or tries to but can’t get Olivia Hutton out of his mind ever since he first saw her sitting in class and instantly became infatuated with her; her smile and those legs; he couldn't take his eyes off her. He asked her out. It was his first date and he wanted to impress her but felt so intense. Then after they left the restaurant was when Olivia went down on him. His mindset had been scrabbled but he knew where his heart was – he had fallen in love with Olivia Hutton, the first girl to give him an orgasm. What follows is an amazing 15-minute verbal exchange between the Dean of the College, Dean Cauldwell (Tracy Letts) and Marcus. The Dean wants to know why Marcus can’t resolve a simple conflict, despite being studious and highly intelligent. Marcus stands up for his ideals and is not intimated by the Dean’s questioning but as the verbal duelling cuts deeper, so does Marcus’s indignant reaction to what he sees as an unjust interrogation of his privacy. Such a scene earmarks it as a perfect example of an ‘independent film’ and why it is destined for art house audiences and will not be generally released as popcorn fodder at multiplexes. Congratulations to James Schamus for directing this film, his first feature, and writing its screenplay. It is a film that he can rightly be proud, and for assembling such a brilliant cast.