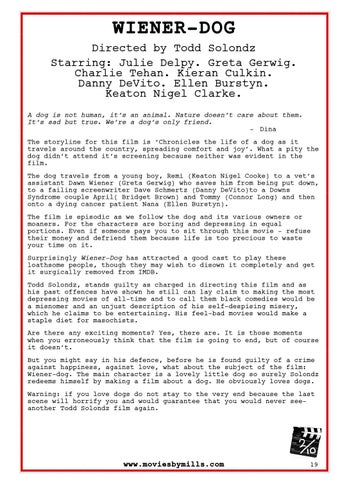 WIENER-DOG Directed by Todd Solondz Starring: Julie Delpy. Greta Gerwig. Charlie Tehan. Kieran Culkin. Danny DeVito. Ellen Burstyn. Keaton Nigel Clarke. A dog is not human, it’s an animal. Nature doesn’t care about them. It’s sad but true. We’re a dog’s only friend. - Dina The storyline for this film is ‘Chronicles the life of a dog as it travels around the country, spreading comfort and joy’. What a pity the dog didn’t attend it’s screening because neither was evident in the film. The dog travels from a young boy, Remi (Keaton Nigel Cooke) to a vet’s assistant Dawn Wiener (Greta Gerwig) who saves him from being put down, to a failing screenwriter Dave Schmertz (Danny DeVito)to a Downs Syndrome couple April( Bridget Brown) and Tommy (Connor Long) and then onto a dying cancer patient Nana (Ellen Burstyn).

The film is episodic as we follow the dog and its various owners or moaners. For the characters are boring and depressing in equal portions. Even if someone pays you to sit through this movie – refuse their money and defriend them because life is too precious to waste your time on it. Surprisingly Wiener-Dog has attracted a good cast to play these loathsome people, though they may wish to disown it completely and get it surgically removed from IMDB. Todd Solondz, stands guilty as charged in directing this film and as his past offences have shown he still can lay claim to making the most depressing movies of all-time and to call them black comedies would be a misnomer and an unjust description of his self-despising misery, which he claims to be entertaining. His feel-bad movies would make a staple diet for masochists. Are there any exciting moments? Yes, there are. It is those moments when you erroneously think that the film is going to end, but of course it doesn’t. But you might say in his defence, before he is found guilty of a crime against happiness, against love, what about the subject of the film: Wiener-dog. The main character is a lovely little dog so surely Solondz redeems himself by making a film about a dog. He obviously loves dogs. Warning: if you love dogs do not stay to the very end because the last scene will horrify you and would guarantee that you would never seeanother Todd Solondz film again.