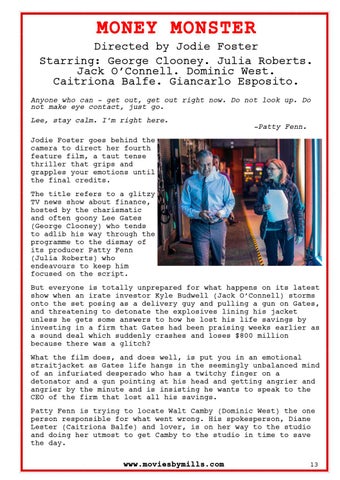 Jodie Foster goes behind the camera to direct her fourth feature film, a taut tense thriller that grips and grapples your emotions until the final credits. The title refers to a glitzy TV news show about finance, hosted by the charismatic and often goony Lee Gates (George Clooney) who tends to adlib his way through the programme to the dismay of its producer Patty Fenn (Julia Roberts) who endeavours to keep him focused on the script. But everyone is totally unprepared for what happens on its latest show when an irate investor Kyle Budwell (Jack O’Connell) storms onto the set posing as a delivery guy and pulling a gun on Gates, and threatening to detonate the explosives lining his jacket unless he gets some answers to how he lost his life savings by investing in a firm that Gates had been praising weeks earlier as a sound deal which suddenly crashes and loses $800 million because there was a glitch? What the film does, and does well, is put you in an emotional straitjacket as Gates life hangs in the seemingly unbalanced mind of an infuriated desperado who has a twitchy finger on a detonator and a gun pointing at his head and getting angrier and angrier by the minute and is insisting he wants to speak to the CEO of the firm that lost all his savings. Patty Fenn is trying to locate Walt Camby (Dominic West) the one person responsible for what went wrong. His spokesperson, Diane Lester (Caitriona Balfe) and lover, is on her way to the studio and doing her utmost to get Camby to the studio in time to save the day.