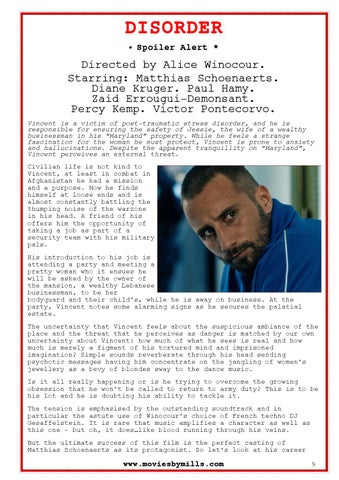 Directed by Alice Winocour. Starring: Matthias Schoenaerts. Diane Kruger. Paul Hamy. Zaid Errougui-Demonsant. Percy Kemp. Victor Pontecorvo. Vincent is a victim of post-traumatic stress disorder, and he is responsible for ensuring the safety of Jessie, the wife of a wealthy businessman in his “Maryland” property. While he feels a strange fascination for the woman he must protect, Vincent is prone to anxiety and hallucinations. Despite the apparent tranquillity on “Maryland”, Vincent perceives an external threat. Civilian life is not kind to Vincent, at least in combat in Afghanistan he had a mission and a purpose. Now he finds himself at loose ends and is almost constantly battling the thumping noise of the warzone in his head. A friend of his offers him the opportunity of taking a job as part of a security team with his military pals. His introduction to his job is attending a party and meeting a pretty woman who it ensues he will be asked by the owner of the mansion, a wealthy Lebanese businessman, to be her bodyguard and their child’s, while he is away on business. At the party, Vincent notes some alarming signs as he secures the palatial estate. The uncertainty that Vincent feels about the suspicious ambiance of the place and the threat that he perceives as danger is matched by our own uncertainty about Vincent: how much of what he sees is real and how much is merely a figment of his tortured mind and imprisoned imagination? Simple sounds reverberate through his head sending psychotic messages having him concentrate on the jangling of women’s jewellery as a bevy of blondes sway to the dance music. Is it all really happening or is he trying to overcome the growing obsession that he won’t be called to return to army duty? This is to be his lot and he is doubting his ability to tackle it. The tension is particular the Gesaffelstein. this one – but

emphasised by the outstanding soundtrack and in astute use of Winocour’s choice of French techno DJ It is rare that music amplifies a character as well as oh, it does…like blood running through his veins.

But the ultimate success of this film is the perfect casting of Matthias Schoenaerts as its protagonist. So let’s look at his career