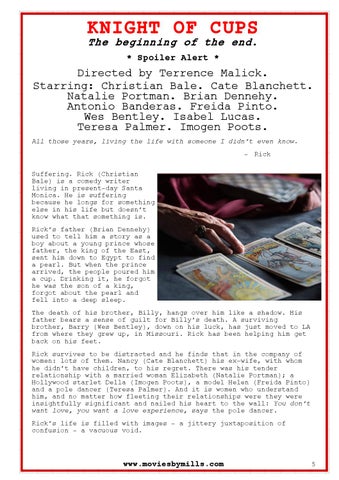 KNIGHT OF CUPS The beginning of the end. * Spoiler Alert *

Directed by Terrence Malick. Starring: Christian Bale. Cate Blanchett. Natalie Portman. Brian Dennehy. Antonio Banderas. Freida Pinto. Wes Bentley. Isabel Lucas. Teresa Palmer. Imogen Poots. All those years, living the life with someone I didn’t even know. - Rick Suffering. Rick (Christian Bale) is a comedy writer living in present-day Santa Monica. He is suffering because he longs for something else in his life but doesn’t know what that something is. Rick’s father (Brian Dennehy) used to tell him a story as a boy about a young prince whose father, the king of the East, sent him down to Egypt to find a pearl. But when the prince arrived, the people poured him a cup. Drinking it, he forgot he was the son of a king, forgot about the pearl and fell into a deep sleep.

The death of his brother, Billy, hangs over him like a shadow. His father bears a sense of guilt for Billy’s death. A surviving brother, Barry (Wes Bentley), down on his luck, has just moved to LA from where they grew up, in Missouri. Rick has been helping him get back on his feet. Rick survives to be distracted and he finds that in the company of women: lots of them. Nancy (Cate Blanchett) his ex-wife, with whom he didn’t have children, to his regret. There was his tender relationship with a married woman Elizabeth (Natalie Portman); a Hollywood starlet Della (Imogen Poots), a model Helen (Freida Pinto) and a pole dancer (Teresa Palmer). And it is women who understand him, and no matter how fleeting their relationships were they were insightfully significant and nailed his heart to the wall: You don’t want love, you want a love experience, says the pole dancer. Rick’s life is filled with images – a jittery juxtaposition of confusion – a vacuous void.