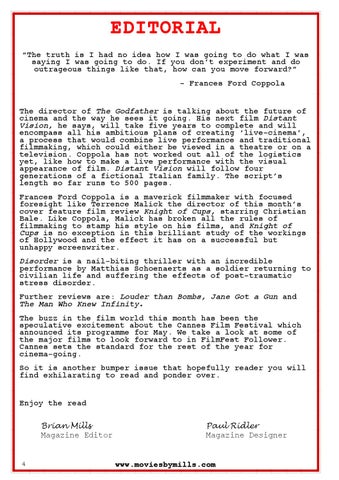 EDITORIAL “The truth is I had no idea how I was going to do what I was saying I was going to do. If you don’t experiment and do outrageous things like that, how can you move forward?” - Frances Ford Coppola

The director of The Godfather is talking about the future of cinema and the way he sees it going. His next film Distant Vision, he says, will take five years to complete and will encompass all his ambitious plans of creating ‘live-cinema’, a process that would combine live performance and traditional filmmaking, which could either be viewed in a theatre or on a television. Coppola has not worked out all of the logistics yet, like how to make a live performance with the visual appearance of film. Distant Vision will follow four generations of a fictional Italian family. The script’s length so far runs to 500 pages. Frances Ford Coppola is a maverick filmmaker with focused foresight like Terrence Malick the director of this month’s cover feature film review Knight of Cups, starring Christian Bale. Like Coppola, Malick has broken all the rules of filmmaking to stamp his style on his films, and Knight of Cups is no exception in this brilliant study of the workings of Hollywood and the effect it has on a successful but unhappy screenwriter. Disorder is a nail-biting thriller with an incredible performance by Matthias Schoenaerts as a soldier returning to civilian life and suffering the effects of post-traumatic stress disorder. Further reviews are: Louder than Bombs, Jane Got a Gun and The Man Who Knew Infinity. The buzz in the film world this month has been the speculative excitement about the Cannes Film Festival which announced its programme for May. We take a look at some of the major films to look forward to in FilmFest Follower. Cannes sets the standard for the rest of the year for cinema-going. So it is another bumper issue that hopefully reader you will find exhilarating to read and ponder over.