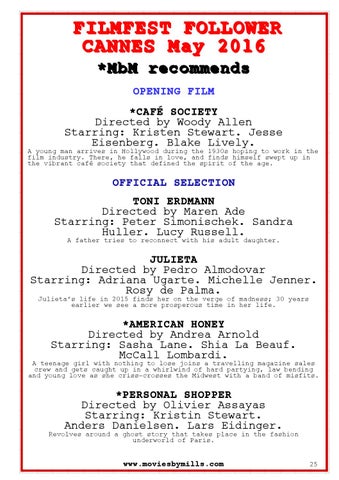 FILMFEST FOLLOWER CANNES May 2016 *MbM recommends OPENING FILM *CAFÉ SOCIETY Directed by Woody Allen Starring: Kristen Stewart. Jesse Eisenberg. Blake Lively. A young man arrives in Hollywood during the 1930s hoping to work in the film industry. There, he falls in love, and finds himself swept up in the vibrant café society that defined the spirit of the age.

*AMERICAN HONEY Directed by Andrea Arnold Starring: Sasha Lane. Shia La Beauf. McCall Lombardi. A teenage girl with nothing to lose joins a travelling magazine sales crew and gets caught up in a whirlwind of hard partying, law bending and young love as she criss-crosses the Midwest with a band of misfits.