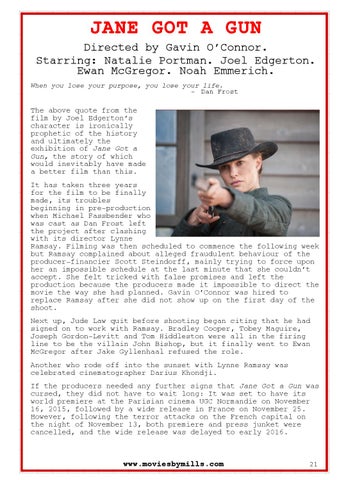 The above quote from the film by Joel Edgerton’s character is ironically prophetic of the history and ultimately the exhibition of Jane Got a Gun, the story of which would inevitably have made a better film than this. It has taken three years for the film to be finally made, its troubles beginning in pre-production when Michael Fassbender who was cast as Dan Frost left the project after clashing with its director Lynne Ramsay. Filming was then scheduled to commence the following week but Ramsay complained about alleged fraudulent behaviour of the producer-financier Scott Steindorff, mainly trying to force upon her an impossible schedule at the last minute that she couldn’t accept. She felt tricked with false promises and left the production because the producers made it impossible to direct the movie the way she had planned. Gavin O’Connor was hired to replace Ramsay after she did not show up on the first day of the shoot. Next up, Jude Law quit before shooting began citing that he had signed on to work with Ramsay. Bradley Cooper, Tobey Maguire, Joseph Gordon-Levitt and Tom Hiddleston were all in the firing line to be the villain John Bishop, but it finally went to Ewan McGregor after Jake Gyllenhaal refused the role. Another who rode off into the sunset with Lynne Ramsay was celebrated cinematographer Darius Khondji. If the producers needed any further signs that Jane Got a Gun was cursed, they did not have to wait long: It was set to have its world premiere at the Parisian cinema UGC Normandie on November 16, 2015, followed by a wide release in France on November 25. However, following the terror attacks on the French capital on the night of November 13, both premiere and press junket were cancelled, and the wide release was delayed to early 2016.