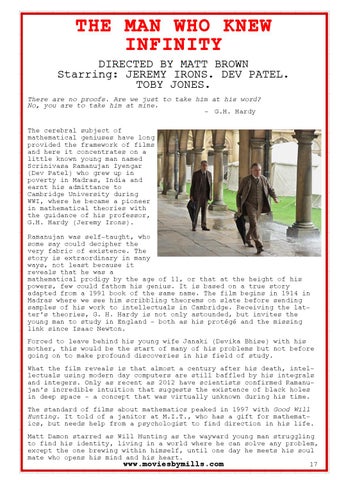 THE MAN WHO KNEW INFINITY DIRECTED BY MATT BROWN Starring: JEREMY IRONS. DEV PATEL. TOBY JONES. There are no proofs. Are we just to take him at his word? No, you are to take him at mine. - G.H. Hardy

The cerebral subject of mathematical geniuses have long provided the framework of films and here it concentrates on a little known young man named Scrinivasa Ramanujan Iyengar (Dev Patel) who grew up in poverty in Madras, India and earnt his admittance to Cambridge University during WWI, where he became a pioneer in mathematical theories with the guidance of his professor, G.H. Hardy (Jeremy Irons). Ramanujan was self-taught, who some say could decipher the very fabric of existence. The story is extraordinary in many ways, not least because it reveals that he was a mathematical prodigy by the age of 11, or that at the height of his powers, few could fathom his genius. It is based on a true story adapted from a 1991 book of the same name. The film begins in 1914 in Madras where we see him scribbling theorems on slate before sending samples of his work to intellectuals in Cambridge. Receiving the latter’s theories, G. H. Hardy is not only astounded, but invites the young man to study in England – both as his protégé and the missing link since Isaac Newton. Forced to leave behind his young wife Janaki (Devika Bhise) with his mother, this would be the start of many of his problems but not before going on to make profound discoveries in his field of study. What the film reveals is that almost a century after his death, intellectuals using modern day computers are still baffled by his integrals and integers. Only as recent as 2012 have scientists confirmed Ramanujan’s incredible intuition that suggests the existence of black holes in deep space – a concept that was virtually unknown during his time. The standard of films about mathematics peaked in 1997 with Good Will Hunting. It told of a janitor at M.I.T., who has a gift for mathematics, but needs help from a psychologist to find direction in his life. Matt Damon starred as Will Hunting as the wayward young man struggling to find his identity, living in a world where he can solve any problem, except the one brewing within himself, until one day he meets his soul mate who opens his mind and his heart. 17 www.moviesbymills.com