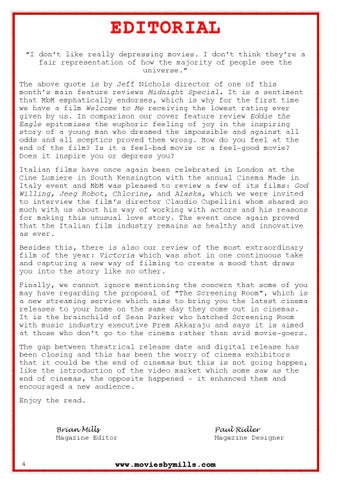 EDITORIAL “I don’t like really depressing movies. I don’t think they’re a fair representation of how the majority of people see the universe.” The above quote is by Jeff Nichols director of one of this month’s main feature reviews Midnight Special. It is a sentiment that MbM emphatically endorses, which is why for the first time we have a film Welcome to Me receiving the lowest rating ever given by us. In comparison our cover feature review Eddie the Eagle epitomises the euphoric feeling of joy in the inspiring story of a young man who dreamed the impossible and against all odds and all sceptics proved them wrong. How do you feel at the end of the film? Is it a feel-bad movie or a feel-good movie? Does it inspire you or depress you? Italian films have once again been celebrated in London at the Cine Lumiere in South Kensington with the annual Cinema Made in Italy event and MbM was pleased to review a few of its films: God Willing, Jeeg Robot, Chlorine, and Alaska, which we were invited to interview the film’s director Claudio Cupellini whom shared so much with us about his way of working with actors and his reasons for making this unusual love story. The event once again proved that the Italian film industry remains as healthy and innovative as ever. Besides this, there is also our review of the most extraordinary film of the year: Victoria which was shot in one continuous take and capturing a new way of filming to create a mood that draws you into the story like no other. Finally, we cannot ignore mentioning the concern that some of you may have regarding the proposal of “The Screening Room”, which is a new streaming service which aims to bring you the latest cinema releases to your home on the same day they come out in cinemas. It is the brainchild of Sean Parker who hatched Screening Room with music industry executive Prem Akkaraju and says it is aimed at those who don’t go to the cinema rather than avid movie-goers. The gap between theatrical release date and digital release has been closing and this has been the worry of cinema exhibitors that it could be the end of cinemas but this is not going happen, like the introduction of the video market which some saw as the end of cinemas, the opposite happened – it enhanced them and encouraged a new audience. Enjoy the read.