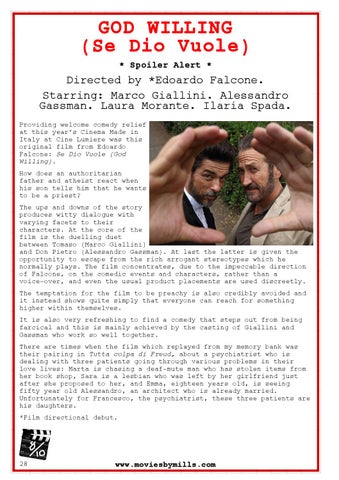 Directed by *Edoardo Falcone. Starring: Marco Giallini. Alessandro Gassman. Laura Morante. Ilaria Spada. Providing welcome comedy relief at this yearâ&#x20AC;&#x2122;s Cinema Made in Italy at Cine Lumiere was this original film from Edoardo Falcone: Se Dio Vuole (God Willing). How does an authoritarian father and atheist react when his son tells him that he wants to be a priest? The ups and downs of the story produces witty dialogue with varying facets to their characters. At the core of the film is the duelling duet between Tomaso (Marco Giallini) and Don Pietro (Alessandro Gassman). At last the latter is given the opportunity to escape from the rich arrogant stereotypes which he normally plays. The film concentrates, due to the impeccable direction of Falcone, on the comedic events and characters, rather than a voice-over, and even the usual product placements are used discreetly. The temptation for the film to be preachy is also credibly avoided and it instead shows quite simply that everyone can reach for something higher within themselves. It is also very refreshing to find a comedy that steps out from being farcical and this is mainly achieved by the casting of Giallini and Gassman who work so well together. There are times when the film which replayed from my memory bank was their pairing in Tutta colpa di Freud, about a psychiatrist who is dealing with three patients going through various problems in their love lives: Marta is chasing a deaf-mute man who has stolen items from her book shop, Sara is a lesbian who was left by her girlfriend just after she proposed to her, and Emma, eighteen years old, is seeing fifty year old Alessandro, an architect who is already married. Unfortunately for Francesco, the psychiatrist, these three patients are his daughters. *Film directional debut.