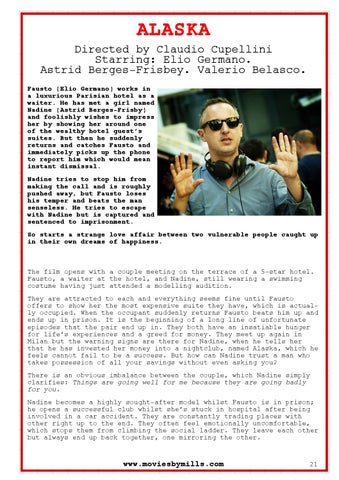 ALASKA Directed by Claudio Cupellini Starring: Elio Germano. Astrid Berges-Frisbey. Valerio Belasco. Fausto (Elio Germano) works in a luxurious Parisian hotel as a waiter. He has met a girl named Nadine (Astrid Berges-Frisby) and foolishly wishes to impress her by showing her around one of the wealthy hotel guest’s suites. But then he suddenly returns and catches Fausto and immediately picks up the phone to report him which would mean instant dismissal. Nadine tries to stop him from making the call and is roughly pushed away, but Fausto loses his temper and beats the man senseless. He tries to escape with Nadine but is captured and sentenced to imprisonment. So starts a strange love affair between two vulnerable people caught up in their own dreams of happiness.

The film opens with a couple meeting on the terrace of a 5-star hotel. Fausto, a waiter at the hotel, and Nadine, still wearing a swimming costume having just attended a modelling audition. They are attracted to each and everything seems fine until Fausto offers to show her the most expensive suite they have, which is actually occupied. When the occupant suddenly returns Fausto beats him up and ends up in prison. It is the beginning of a long line of unfortunate episodes that the pair end up in. They both have an insatiable hunger for life’s experiences and a greed for money. They meet up again in Milan but the warning signs are there for Nadine, when he tells her that he has invested her money into a nightclub, named Alaska, which he feels cannot fail to be a success. But how can Nadine trust a man who takes possession of all your savings without even asking you? There is an obvious imbalance between the couple, which Nadine simply clarifies: Things are going well for me because they are going badly for you.

Nadine becomes a highly sought-after model whilst Fausto is in prison; he opens a successful club whilst she’s stuck in hospital after being involved in a car accident. They are constantly trading places with other right up to the end. They often feel emotionally uncomfortable, which stops them from climbing the social ladder. They leave each other but always end up back together, one mirroring the other.