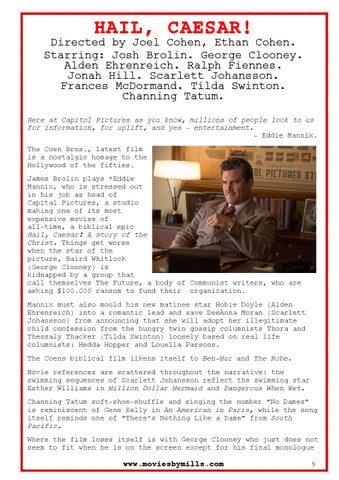 Directed by Joel Cohen, Ethan Cohen. Starring: Josh Brolin. George Clooney. Alden Ehrenreich. Ralph Fiennes. Jonah Hill. Scarlett Johansson. Frances McDormand. Tilda Swinton. Channing Tatum. Here at Capitol Pictures as you know, millions of people look to us for information, for uplift, and yes – entertainment. - Eddie Mannix. The Coen Bros., latest film is a nostalgic homage to the Hollywood of the fifties. James Brolin plays *Eddie Mannix, who is stressed out in his job as head of Capital Pictures, a studio making one of its most expensive movies of all-time, a biblical epic Hail, Caesar! A story of the Christ. Things get worse when the star of the picture, Baird Whitlock (George Clooney) is kidnapped by a group that call themselves The Future, a body of Communist writers, who are asking $100.000 ransom to fund their organization. Mannix must also mould his new matinee star Hobie Doyle (Alden Ehrenreich) into a romantic lead and save DeeAnna Moran (Scarlett Johansson) from announcing that she will adopt her illegitimate child confession from the hungry twin gossip columnists Thora and Thessaly Thacker (Tilda Swinton) loosely based on real life columnists: Hedda Hopper and Louella Parsons. The Coens biblical film likens itself to Ben-Hur and The Robe. Movie references are scattered throughout the narrative: the swimming sequences of Scarlett Johansson reflect the swimming star Esther Williams in Million Dollar Mermaid and Dangerous When Wet. Channing Tatum soft-shoe-shuffle and singing the number “No Dames” is reminiscent of Gene Kelly in An American in Paris, while the song itself reminds one of “There’s Nothing Like a Dame” from South Pacific.