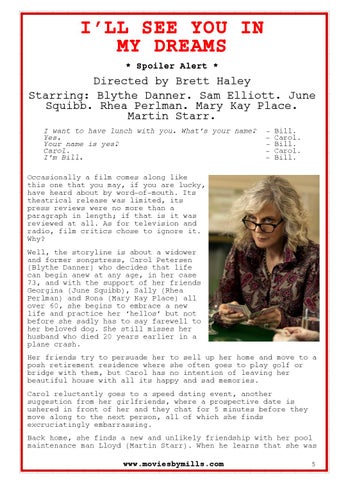 I’LL SEE YOU IN MY DREAMS * Spoiler Alert *

Occasionally a film comes along like this one that you may, if you are lucky, have heard about by word-of-mouth. Its theatrical release was limited, its press reviews were no more than a paragraph in length; if that is it was reviewed at all. As for television and radio, film critics chose to ignore it. Why? Well, the storyline is about a widower and former songstress, Carol Petersen (Blythe Danner) who decides that life can begin anew at any age, in her case 73, and with the support of her friends Georgina (June Squibb), Sally (Rhea Perlman) and Rona (Mary Kay Place) all over 60, she begins to embrace a new life and practice her ‘hellos’ but not before she sadly has to say farewell to her beloved dog. She still misses her husband who died 20 years earlier in a plane crash. Her friends try to persuade her to sell up her home and move to a posh retirement residence where she often goes to play golf or bridge with them, but Carol has no intention of leaving her beautiful house with all its happy and sad memories. Carol reluctantly goes to a speed dating event, another suggestion from her girlfriends, where a prospective date is ushered in front of her and they chat for 5 minutes before they move along to the next person, all of which she finds excruciatingly embarrassing.

Back home, she finds a new and unlikely friendship with her pool maintenance man Lloyd (Martin Starr). When he learns that she was