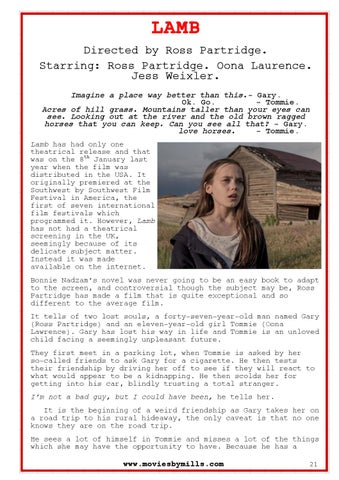 LAMB Directed by Ross Partridge. Starring: Ross Partridge. Oona Laurence. Jess Weixler. Imagine a place way better than this.– Gary. Ok. Go. – Tommie. Acres of hill grass. Mountains taller than your eyes can see. Looking out at the river and the old brown ragged horses that you can keep. Can you see all that? – Gary. love horses. – Tommie. Lamb has had only one theatrical release and that was on the 8th January last year when the film was distributed in the USA. It originally premiered at the Southwest by Southwest Film Festival in America, the first of seven international film festivals which programmed it. However, Lamb has not had a theatrical screening in the UK, seemingly because of its delicate subject matter. Instead it was made available on the internet. Bonnie Nadzam’s novel was never going to be an easy book to adapt to the screen, and controversial though the subject may be, Ross Partridge has made a film that is quite exceptional and so different to the average film. It tells of two lost souls, a forty-seven-year-old man named Gary (Ross Partridge) and an eleven-year-old girl Tommie (Oona Lawrence). Gary has lost his way in life and Tommie is an unloved child facing a seemingly unpleasant future. They first meet in a parking lot, when Tommie is asked by her so-called friends to ask Gary for a cigarette. He then tests their friendship by driving her off to see if they will react to what would appear to be a kidnapping. He then scolds her for getting into his car, blindly trusting a total stranger. I’m not a bad guy, but I could have been, he tells her. It is the beginning of a weird friendship as Gary takes her on a road trip to his rural hideaway, the only caveat is that no one knows they are on the road trip.

He sees a lot of himself in Tommie and misses a lot of the things which she may have the opportunity to have. Because he has a