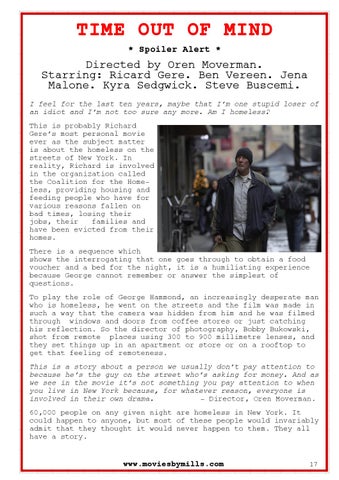 TIME OUT OF MIND * Spoiler Alert *

Directed by Oren Moverman. Starring: Ricard Gere. Ben Vereen. Jena Malone. Kyra Sedgwick. Steve Buscemi. I feel for the last ten years, maybe that I’m one stupid loser of an idiot and I’m not too sure any more. Am I homeless? This is probably Richard Gere’s most personal movie ever as the subject matter is about the homeless on the streets of New York. In reality, Richard is involved in the organization called the Coalition for the Homeless, providing housing and feeding people who have for various reasons fallen on bad times, losing their jobs, their families and have been evicted from their homes. There is a sequence which shows the interrogating that one goes through to obtain a food voucher and a bed for the night, it is a humiliating experience because George cannot remember or answer the simplest of questions. To play the role of George Hammond, an increasingly desperate man who is homeless, he went on the streets and the film was made in such a way that the camera was hidden from him and he was filmed through windows and doors from coffee stores or just catching his reflection. So the director of photography, Bobby Bukowski, shot from remote places using 300 to 900 millimetre lenses, and they set things up in an apartment or store or on a rooftop to get that feeling of remoteness. This is a story about a person we usually don’t pay attention to because he’s the guy on the street who’s asking for money. And as we see in the movie it’s not something you pay attention to when you live in New York because, for whatever reason, everyone is involved in their own drama. – Director, Oren Moverman. 60,000 people on any given night are homeless in New York. It could happen to anyone, but most of these people would invariably admit that they thought it would never happen to them. They all have a story.