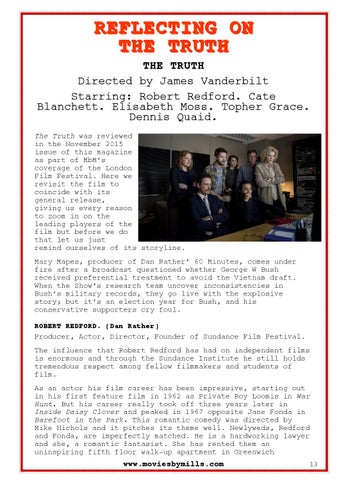 REFLECTING ON THE TRUTH THE TRUTH Directed by James Vanderbilt Starring: Robert Redford. Cate Blanchett. Elisabeth Moss. Topher Grace. Dennis Quaid. The Truth was reviewed in the November 2015 issue of this magazine as part of MbM’s coverage of the London Film Festival. Here we revisit the film to coincide with its general release, giving us every reason to zoom in on the leading players of the film but before we do that let us just remind ourselves of its storyline. Mary Mapes, producer of Dan Rather’ 60 Minutes, comes under fire after a broadcast questioned whether George W Bush received preferential treatment to avoid the Vietnam draft. When the Show’s research team uncover inconsistencies in Bush’s military records, they go live with the explosive story; but it’s an election year for Bush, and his conservative supporters cry foul. ROBERT REDFORD. (Dan Rather) Producer, Actor, Director, Founder of Sundance Film Festival. The influence that Robert Redford has had on independent films is enormous and through the Sundance Institute he still holds tremendous respect among fellow filmmakers and students of film. As an actor his film career has been impressive, starting out in his first feature film in 1962 as Private Roy Loomis in War Hunt. But his career really took off three years later in Inside Daisy Clover and peaked in 1967 opposite Jane Fonda in Barefoot in the Park. This romantic comedy was directed by Mike Nichols and it pitches its theme well. Newlyweds, Redford and Fonda, are imperfectly matched. He is a hardworking lawyer and she, a romantic fantasist. She has rented them an uninspiring fifth floor walk-up apartment in Greenwich