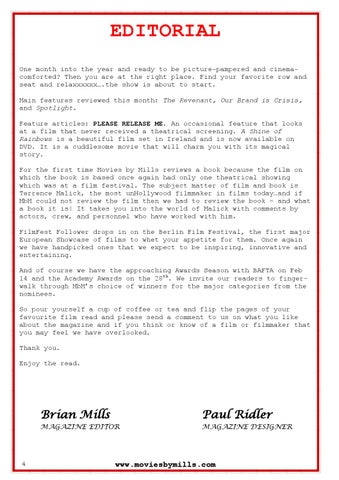 EDITORIAL One month into the year and ready to be picture-pampered and cinemacomforted? Then you are at the right place. Find your favorite row and seat and relaxxxxxx….the show is about to start. Main features reviewed this month: The Revenant, Our Brand is Crisis, and Spotlight. Feature articles: PLEASE RELEASE ME. An occasional feature that looks at a film that never received a theatrical screening. A Shine of Rainbows is a beautiful film set in Ireland and is now available on DVD. It is a cuddlesome movie that will charm you with its magical story. For the first time Movies by Mills reviews a book because the film on which the book is based once again had only one theatrical showing which was at a film festival. The subject matter of film and book is Terrence Malick, the most unHollywood filmmaker in films today…and if MbM could not review the film then we had to review the book – and what a book it is! It takes you into the world of Malick with comments by actors, crew, and personnel who have worked with him. FilmFest Follower drops in on the Berlin Film Festival, the first major European Showcase of films to whet your appetite for them. Once again we have handpicked ones that we expect to be inspiring, innovative and entertaining. And of course we have the approaching Awards Season with BAFTA on Feb 14 and the Academy Awards on the 28th. We invite our readers to fingerwalk through MbM’s choice of winners for the major categories from the nominees. So pour yourself a cup of coffee or tea and flip the pages of your favourite film read and please send a comment to us on what you like about the magazine and if you think or know of a film or filmmaker that you may feel we have overlooked. Thank you. Enjoy the read.