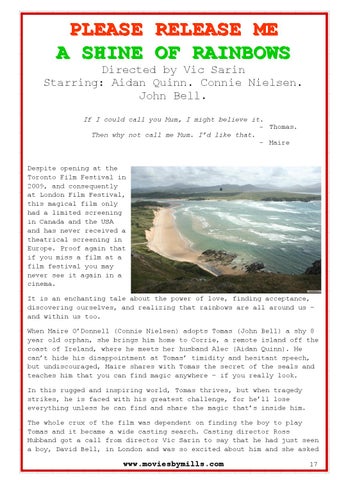 PLEASE RELEASE ME A SHINE OF RAINBOWS Directed by Vic Sarin Starring: Aidan Quinn. Connie Nielsen. John Bell. If I could call you Mum, I might believe it. - Thomas. Then why not call me Mum. I’d like that. - Maire

Despite opening at the Toronto Film Festival in 2009, and consequently at London Film Festival, this magical film only had a limited screening in Canada and the USA and has never received a theatrical screening in Europe. Proof again that if you miss a film at a film festival you may never see it again in a cinema. It is an enchanting tale about the power of love, finding acceptance, discovering ourselves, and realizing that rainbows are all around us – and within us too. When Maire O’Donnell (Connie Nielsen) adopts Tomas (John Bell) a shy 8 year old orphan, she brings him home to Corrie, a remote island off the coast of Ireland, where he meets her husband Alec (Aidan Quinn). He can’t hide his disappointment at Tomas’ timidity and hesitant speech, but undiscouraged, Maire shares with Tomas the secret of the seals and teaches him that you can find magic anywhere – if you really look. In this rugged and inspiring world, Tomas thrives, but when tragedy strikes, he is faced with his greatest challenge, for he’ll lose everything unless he can find and share the magic that’s inside him. The whole crux of the film was dependent on finding the boy to play Tomas and it became a wide casting search. Casting director Ross Hubband got a call from director Vic Sarin to say that he had just seen a boy, David Bell, in London and was so excited about him and she asked